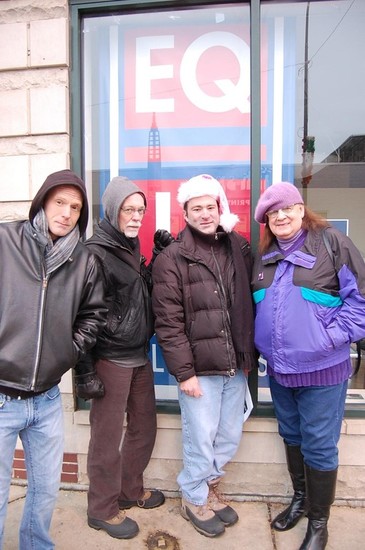 “Rick did not deserve this," said transgender activist June LaKove

The inclement weather and timing of the protest could have been to blame for the small group, which consisted of four people. The protest was organized by Brother Michael Oboza, founder of the Bisexual Queer Alliance Chicago.

"Rick is a face in our community and he's been there from the start," Oboza told ChicagoPride.com. "This was such a sad and demeaning way that he was let go."

"We want people to know why we are upset by this," said LaKove.

"The way they let him go was just disgusting," said Czar in agreement.

"Bernard has done some good work," commented Craymer. "But Rick was the champion that led to many a great thing, he was the public face, the face of our community. He was let go because he was thought of as a trouble maker instead of the warrior that he was."

Garcia, a long-time LGBT advocate known to be expressly outspoken on matters of equity and fairness, was fired Dec. 16. He has since gone public with harsh criticism of Cherkasov and the organization he co-founded in 1992.

"I am the founder of the organization, they can't take that away from me."

Garcia was not present at Thursday's protest and the Equality Illinois offices, 3318 N. Halsted, were closed in observance of the holidays.

"There is never a good time for such a difficult decision," Cherkasov told ChicagoPride.com in an interview earlier this week. "Rick clearly has been one of the earliest advocates for LGBT equality in Illinois."

Cherkasov said that he takes the conversation of the community seriously and has been willing to speak with anyone calling the EQIL office.

"We have to focus not on the personalities of the actors in the movement, but what's at the end result and our goal is full equality for lesbian, gay, bisexual and transgender people in Illinois. We have to keep our eyes on the prize and not be distracted, divided and unfocused," said Cherkasov. "Our focus on LGBT equality is unwavering."