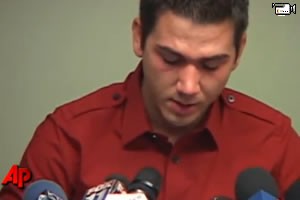 In October, Burts tested positive for the virus that causes AIDS. His diagnosis shut down the straight adult film industry for more than a month. He was identified only as "Patient Zeta" in media reports.

Straight performers must submit to monthly testing but do not wear condoms, while gay performers are typically required to wear rubbers but testing is not mandated.

Appearing at a press conference, Burts said the testing gives performers a false sense of security.

"They [producers] tell you that the testing is there in place to protect you. They tell you, you'll get tested every month. They have a clinic in place for performers called AIM to protect you from getting STDs and HIV. So I felt that with this in place I was more protected than outside in the real world where I wasn't being tested. After being in the industry for one month, I came up with three STDs … chlamydia, gonorrhea and herpes," he told reporters.

Burts went on to say that when he tested positive for HIV he felt neglected.

Clinic officials claim he must have acquired the virus in his personal life because none of his co-stars tested positive after one month, a fact Burts has denied, the Los Angeles Times reported.

"It's very dangerous," he said of adult film work. "It should be required that you wear a condom on the set."