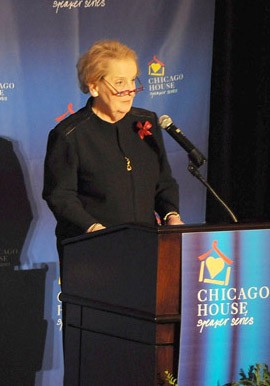 Ms. Albright's nearly 60 minute talk focused on the significant needs of the less fortunate, not just in Chicago, but globally. The former Clinton-era diplomat, and first female Secretary of State, used examples from her interactions with extraordinary as well as ordinary people around the world to hammer home her message of the need for even greater public service efforts.

With an irreverent sense of humor and a self-deprecating style she regaled the noon-time crowd with stories of her family and her childhood and how her experiences helped make human rights and women's rights a central focus of her work.

Utilizing verbal glimpses into her time as US Secretary of State she implored the attendees to continue working for the underserved. "We may never accomplish miracles," she said, "but we will never accomplish anything unless we first care."

"We cannot be safe if the world around us has grown desperate," Albright expressed as she addressed the issues of poverty, ignorance and disease.

"The record of neglect is disappointing and dangerous," she continued in her presentation, "we cannot have peace of mind if our neighbors lack even a piece of bread."

When asked by the audience during a question and answer session her thoughts on what should drive policies, she responded, "put people first."

Chicago House, the organization which invited Dr. Albright, was founded in 1985 to provide housing and supportive services for people living with HIV and AIDS.

Albright's appearance was the second in the series that began with a talk, last year, by her one-time boss, former President Bill Clinton. The series helps to raise awareness and funds for Chicago House, a social service agency that assists homeless victims of HIV/AIDS return to a productive life through transitional housing, educational opportunities, healthcare access and work training programs.

According to the Rev. Stan Sloan, Chicago House's CEO, the Speakers Series Luncheon has raised nearly $250,000 to date.