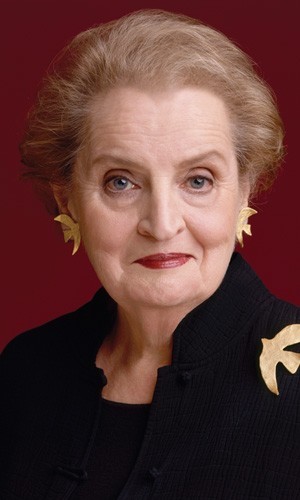 The Annual Speaker Series Luncheon, which launched last year as a new endeavor for Chicago House aims to raise awareness and education around the key issues of HIV/AIDS and homelessness. Chicago House was founded in 1985 to provide housing and supportive services for people living with HIV and AIDS.

"We are so excited to have Madeleine Albright as our guest," Chicago House CEO Stan Sloan told ChicagoPride.com. "Our goals for the luncheon are twofold: to raise funds for our critically needed housing and programs; and to further educate our local communities about strategies and recent developments in HIV/AIDS and homelessness. As the former Secretary of State, Madeleine Albright will reflect on these and other issues, bringing in both international and domestic perspectives."

Throughout her career, Albright has made human rights a central focus of her work and has built her life's work around being a strong voice for oppressed women globally. In addition, she championed former President Bill Clinton's efforts to fight AIDS in sub-Saharan Africa and help lay the groundwork that allows for greater access to life-saving medication for populations with a desperate need.

From 1993 to 1997, Albright served as the U.S. Permanent Representative to the United Nations and as a member of the President's Cabinet.

In 1997, she was named the first female Secretary of State and became, at that time, the highest ranking woman in the history of the U.S. government. As Secretary of State, Albright reinforced America's alliances, advocated democracy and human rights and promoted American trade and business, labor and environmental standards abroad.

As the chair of Albright Stonebridge Group, a global strategy firm, and chair of Albright Capital Management LLC, an investment advisory firm focused on emerging markets, Albright continues to be an advocate and a strong leader in the fight for global human rights.

Former Secretary Albright is a professor in the Practice of Diplomacy at the Georgetown University School of Foreign Service. She chairs both the National Democratic Institute for International Affairs, the Pew Global Attitudes Project and serves as president of the Truman Scholarship Foundation. Albright serves on the Board of Directors of the Council on Foreign Relations and the Board of Trustees for the Aspen Institute. In 2009, Albright accepted an invitation, by NATO Secretary General Anders Fogh Rasmussen, to chair a group of experts focused on developing NATO's New Strategic Concept.

Albright is the author of four New York Times best-sellers: her autobiography, Madam Secretary: A Memoir, (2003); The Mighty and the Almighty: Reflections on America, God, and World Affairs, (2006); Memo to the President: How We Can Restore America's Reputation and Leadership, (2008) and Read My Pins: Stories from a Diplomat's Jewel Box, (2009).

Her next book, While I Was Growing Up, is slated for release in 2012. It tells the story of Albright's experiences and those of her family during and immediately after World War II, thus providing a fresh lens through which to view some of the modern era's most tumultuous years.

Albright's address and lunch will begin at 11:30 a.m. on Thursday, December 9, at the Palmer House Hilton, located at 17 East Monroe Street in downtown Chicago.

Tickets may be purchased through the Chicago House at 773-248-5200, ext. 304 or on their website at http://www.chicagohouse.org and begin at $150. All proceeds from the event benefit the formerly homeless victims of HIV/AIDS that Chicago House supports through their broad programs and services.