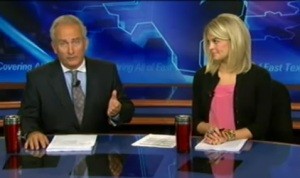 KETK-NBC news anchors ask: “Will the acceptance of homosexuality in this society be the downfall of America?”

Tyler, Texas - Courage Campaign has launched a campaign against a Texas TV and radio station for their anti-gay segment and is demanding NBC Universal pull its affiliation with KETK, which serves East Texas.

During a live televised segment on Wednesday, NBC-affiliate KETK news anchors ask: "Will the acceptance of homosexuality in this society be the downfall of America?"

The television anchors introduced the segment with a reference to an Associated Press report Tuesday that President Obama has appointed a record number of openly gay individuals to posts in the administration -- more than 150 so far.

"And he's only been in office for two years," one of the morning hosts said, adding that the news has "not really gotten any coverage ... but that's what we're talking about."

The segment was aired as part of a simulcast with the KTBB-FM radio show hosted by Garth Maier.

"Pretty soon we're going to have a gay president, and that would be the worst," said one caller. "'We the people' doesn't count anymore!"

Gay media watchdog GLAAD immediately responded and KETK has agreed to pull the 8-minute segment from its website. The clip is no longer available on YouTube at the request of KETK owner ComCorp of Tyler. (The video can be viewed here.)

KETK's response is not enough for the California-based gay rights group Courage Campaign, which has launched a protest demanding that NBC Universal pull its affiliation with the Tyler-based station.

"We are shocked by the segment aired on KETK-NBC in Texas, in which the anchors asked viewers if the acceptance of gays would lead to the 'downfall of America.' As president of NBC Universal, we demand that you take action now to end your affiliate relationship with KETK immediately," the protest petition reads.

Thursday, the owner of KTBB-FM apologized saying the segment was "poorly worded at best, and inappropriate altogether at worst."

However, the radio host who was apparently behind the segment, Garth Meier, has yet to take responsibility. Meier, who lists bible study as his hobby on the KTBB website, says the story needs attention "because the seven percent are pushing the [gay] agenda on the other ninety-three percent."