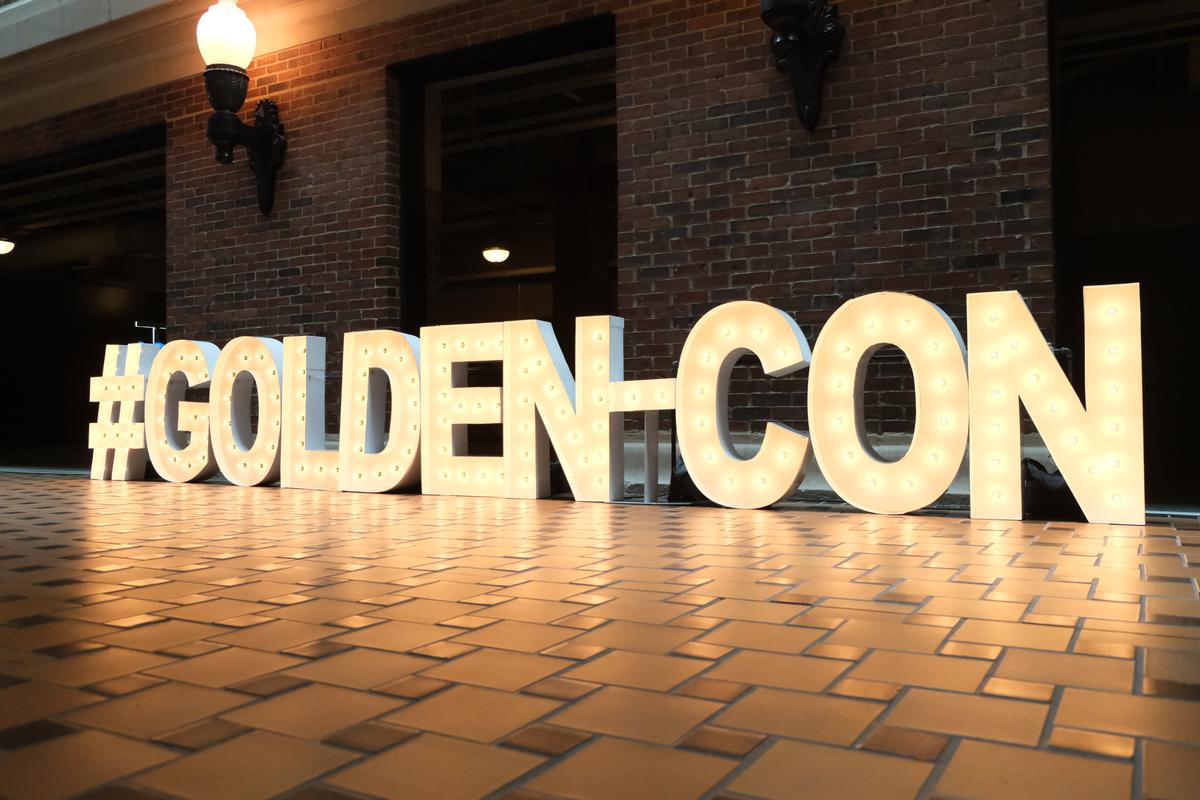 The 2nd annual Golden-Con: Thank You For Being A Fan convention is a 3-day festival at the Sheraton Grand Chicago Riverwalk Hotel – and about 4,000 are expected to attend, which is about 1,000 more than attended in 2022.

Co-organizer Brendan Balof said the 2022 event “was among the most memorable experiences of my life.” He added, “It began as a project to focus on, work on, and dream about during the lockdown periods of the first waves of COVID. The event happened as the world was seemingly just beginning to peek it’s head out after those lockdowns. So, the event had an energy of love and fellowship before you even added the layers of comedy that come anytime you’re celebrating fans of a show like ‘The Golden Girls.”

Co-organizer Zack Hudson echoed the impact of the 2022 show, stating that “one of the most electrifying moments” was seeing and hearing Cindy Fee, the original ‘Thank You For Being A Friend’ theme song singer perform live on stage alongside Aaron Scott, who rose to viral fame when his gospel duet with Cindy’s version of “Thank You For Being A Friend” made the rounds to millions and millions of views.

“They are both powerhouse performers with rare vocal powers. I get chills thinking about it.”

This year’s event kicks off on Friday, March 31, with many Golden-Con staples returning, including Golden Gab Fest, Lost Episode Performances, Bea a Friend, All About Estelle, Grab That Dough – Trivia Show, Unvarnished Gold, and more.

“Golden-Con is, first and foremost, a labor of love. But we are working to fine-tune Golden-Con into a labor of business so that we can invest back into it to sustain it and help it grow. This year we’re set up to welcome more fans than we could (last year) due to our new venue and no current social-distancing mandates.”

Golden-Con will run rampant through the Sheraton Grand Chicago Riverwalk, filling 125,000 square feet of meeting space. “We’ll be able to equip our vendors and performers in ways we could not previously,” said co-organizer Brad Balof.

Golden-Con will feature Chicago’s Stewpendous Trivia to host live trivia shows, one of the most popular elements in 2022.

“We’re stacking the weekend with fun events again, like the Mother of a Solid Gold Dancer Disco. And we’re bringing in DJ Paul Joseph from London for that as he did such a great job” last year, Hudson said.

To that, this year’s Golden-Con will feature return appearances by most of last year’s guests and, Hudson said, “we’re adding another whole slate of guest stars, writers, and producers who we didn’t have last year. If you see a name on “The Golden Girls” credits, we’re trying to bring them in now or in the future.”

Hudson said the 2022 event – which organizers have dubbed, season one – was successful on multiple fronts. “We kind of realized the full power of ‘Golden Girls’ fandom once the worldwide press found out about Golden-Con. We took a few deep breaths and were able to successfully switch from an event at Center on Halsted to a much bigger venue and welcome fans like us from around the world. I believe we gave folks a good show. We’ve heard nothing but good things and happy stories from folks who joined us for the first event. So, in my mind, I think 2023 will be successful if I’m confident that we’re giving folks a heck of a show and they leave happy.”

Hudson said one of his favorite memories from the 2022 gig was the surprise marriage proposal staged for a ‘Golden Girls’ superfan named Anthony. His partner — now fiancé — asked if organizers could help him set it up – and they did. “We pulled Anthony onstage under the guise of talking about his very popular ‘Golden Girls’ TikTok videos. Once we called David on stage, we stepped out of the way. As soon as folks in the audience saw the ring box that David was holding, the crowd went wild. Anthony said ‘yes.’ It was beautiful; I’m so glad David reached out to us.”

Hudson added, “This whole idea started many years ago. And as it formed in my head, I’ve had two folks front and center in my brain who I’d like to welcome and present as our Golden Guests. First and foremost, we’d love to be able to contact “The Golden Girls” creator, Susan Harris. I don’t have to tell you that, without her, this party wouldn’t be happening. Also, the very first guest star from the show I ever thought about booking was Jenny Lewis. She played wicked Sunshine Cadet Daisy, who held Rose’s teddy bear for ransom. She was a child actor in the 1980s. Today she’s a very well-known independent musician. But back then she was cast as Lucille Ball’s granddaughter in Lucy’s very last TV series, “Life With Lucy.” For years I’ve wanted to ask her about that.”

For more information about the 2nd annual Golden-Con: Thank You For Being A Fan, including tickets, go to: thankyouforbeingafan.com