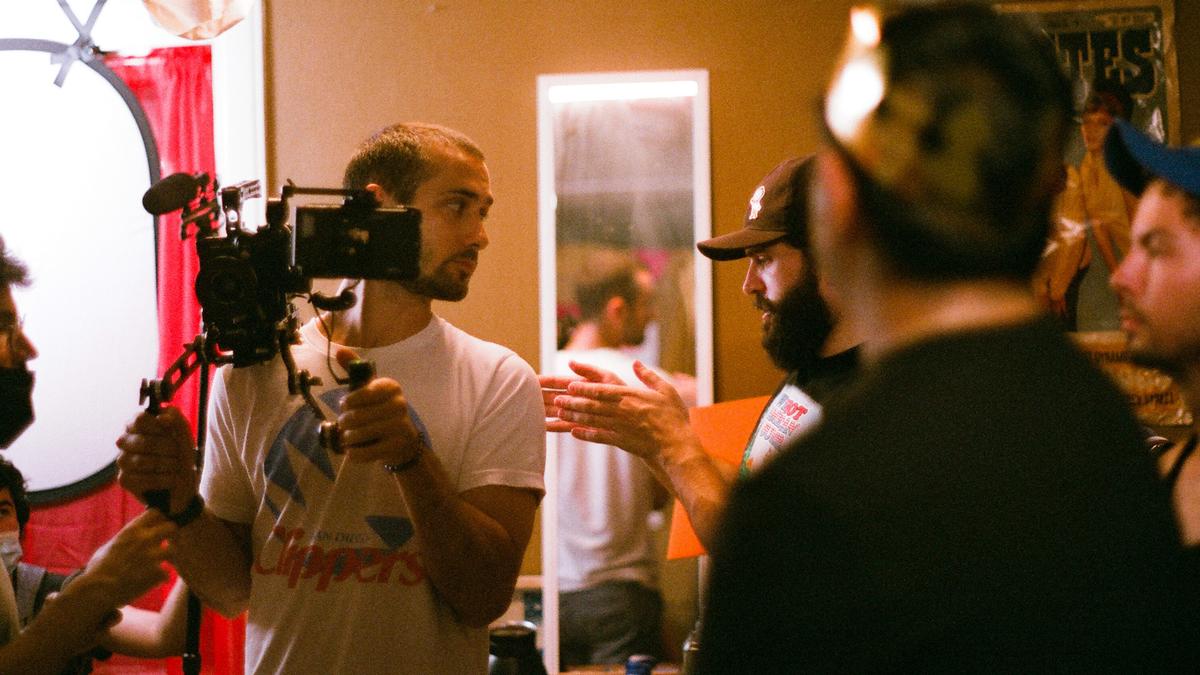 photo credit // shawn kelley
TV shows and films about sex work often either glorify the trade or exploit it, but not so in Adam in Fragments, a new original series set to begin streaming November 17 from Dekkoo.com, a subscription streaming service dedicated to gay men.

The provocative, gritty drama follows Adam (Beau Swartz) as he returns to his former life as a sex worker and quickly re-engages with his seedy and often dangerous male clients. His urge to guide a young and naïve aspiring adult film starlet and protect her from their terrorizing handler, Felix, triggers a series of events that sends violent ripples through the Los Angeles underground sex-trade.

“It was important for us to have a great foundation of understanding for this lifestyle and how it could be alluring for a certain kind of person,” said director Omar Salas Zamora. “By the time we were on set, it was important to sober the environment. To stand back and let things play out as they naturally would. To have no judgment towards these people or the lives they lead.”

“We did the best we could trying to adjust this sprawling world to (a) micro-series format,” Zamora said. “I’m very proud of what we were able to accomplish given our means and time constraints. The project was wholly shot in Los Angeles over three weeks in the summer of 2022. We were able to convert locations we already had access to into working sets for our characters.”

Adam is a man who is fiercely protecting his anonymity, leading to his protecting the only person who he’s opened up to: a fellow sex worker named Lucy, Zamora said.

Adam is much like Adam In Wonderland, thus, the directors “(let) him move through this trade with ease until he disrupts the natural flow of things,” Zamora said.

“There was no one sex worker (who) Adam was modeled after. In research, I really fell in love with the photography of Philip-Lorca diCorcia, who often photographed young hustlers on Hollywood streets in the 1990s,” Zamora said. “(Adam’s) images had a loneliness that I felt the documentaries about hustlers didn’t. Those hustlers spoke a mile a minute and ran around the neighborhood like they owned it. I think Adam ended up having both of those qualities to him.”

Producers looked to turn the series into the crime thriller genre, or sorts. “There’s a great pulp simplicity to the material that allowed us to really focus on the style and tone of the project,” Zamora said.

Zamora said he wanted Beau Swartz from day one: “He originated the role in a short film years ago and we both had so much built in background for the character,” Zamora said.

Adam in Fragments is produced by Dekkoo Films and The Arbor Company. Zamora wrote and directed the series with Calvin Picou. Each episode of Adam in Fragments builds a new picture of Adam, starting with “Crawling Back,” in which a young man returns to his former life as a sex worker and quickly re-engages with his seedy and often dangerous male clients.

“Throughout the series, Adam remains enigmatic,” says Brian Sokel, president of Dekkoo who executive produces along with Derek Curl.  He selected Adam in Fragments as an exclusive series for Dekkoo.

“The moment viewers think they have a handle on him, they realize that they do not.  Adam’s ability to maintain his anonymity by never getting too close to johns, pimps, drug dealers, and even viewers, allows him some level of control, and it makes the series a fascinating and almost immersive experience for the audience.”

Zamora added: “Mainstream society will view Adam and the characters in Adam in Fragments as irredeemable, but these veterans of the underground are, in most cases, comfortable in their skin and together, they form something of a family unit. It is only when a fresh new face comes along, with unattainable dreams and false illusions about life, that chaos ensues. Adam’s mistake is that he allows himself to become emotionally accessible to Lucy.

“We hope viewers find the humanity in these difficult characters. They are not heroes, villains, or victims. They merely exist. I’m very happy with how the Adam story ends. It’s a full arc that feels complete to me.”

For more information, go to: Dekkoo.com.