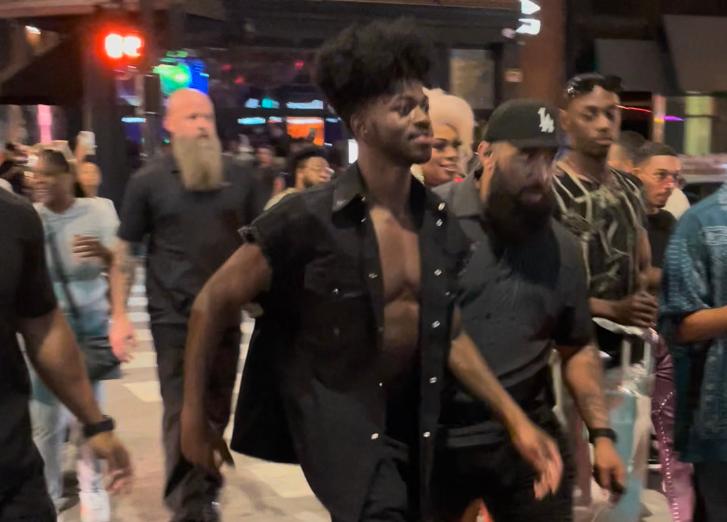 Out rapper Lil Nas X made a surprise visit to Chicago’s Northalsted neighborhood, long known as Boystown, and he wowed the crowds during his multiple stops at popular LGBTQ bars.

The "Montero" rapper, with his entourage, went to D.S. Late at D.S. Tequila, Roscoe’s, Hydrate and Progress on Thursday night, GoPride.com confirmed.

Photos and videos of the renowned artist - bearing his shredded six-pack abs - hit social media as soon as he was spotted along North Halsted Street.

The 23-year-old multi-platinum, award-winning sensation is one of the music industry’s biggest stars -- yet locals noted his friendly, positive, outgoing manner.

“He really enjoyed himself,” said Hydrate manager Brad Gebbia. “He walked around and danced with the patrons on stage and around the dance floor.”

Nas was at Hydrate for about 45 minutes. He requested a few songs "and just enjoyed the night," Gebbia said. "He was great with the staff, very kind and humbling.”

Before leaving Hydrate, he posed for some photos with fans and bar staff.

Northalsted Business Alliance posted a video of Nas walking near the corner of North Halsted and Roscoe Streets on Instagram with the caption, “Chicago’s Proudest Neighborhood got a LIL more proud this weekend.”

Lil Nas X, aka, Montero Hill came out as gay in 2009 at the height of his “Old Town Road” success.

After coming out, his songs “Montero (Call Me By Your Name”) and “Industry Baby” were very queer and very successful, both reaching the top spot of the Billboard Hot 100.