Meeks: If I'm Mayor of Chicago, I'll be too busy to deprive gays of civil rights 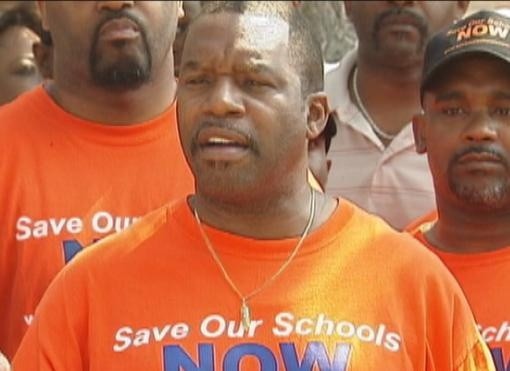 "So, our right to basic equality would depend on his whim," said Rep. Greg Harris

Chicago, IL - State Senator and Rev. James Meeks now says that if he is elected Mayor of Chicago, he'll be too busy with issues like crime and schools to worry about oppressing gay people.

Meeks (D-Ill) is one of dozens of Chicago politicians publicly considering a run for mayor since Mayor Richard M. Daley announced Tuesday that he will not seek a seventh term. In a Chicago Sun-Times poll taken the next day, Meeks got 10 percent, with Cook County Sheriff Tom Dart getting 12 percent.

Meeks has refused to talk on camera since Tuesday, but he did do a phone interview with FOX Chicago News about his anti-gay politics. He said that if he's elected Mayor, he'll be too busy to deprive gay people of their civil rights.

"Now, if I were sitting around bored with nothing to do, that stuff might come up," Meeks told FOX Chicago News. "But I expect to be so busy with schools, crime and budget problems during my first term that I wouldn't have any time."

Meeks also serves as the pastor of Chicago's 22,000 member strong Salem Baptist Church where his anti-gay stance is in sharp contrast to the gay-friend Daley administration.

In 2007, the Southern Poverty Law Center (SPLC) named Meeks one of the "10 leading black religious voices in the anti-gay movement." The Illinois Family Institute, an anti-gay group, lauded Meeks in 2006 for leading African Americans in ‘clearly understanding the threat of gay marriage.' Meeks was criticized for calling homosexuality "an evil sickness."

Meeks also actively campaigned to defeat SB3186, an Illinois LGBT non-discrimination bill, while serving in the Illinois state legislature. He was the only African American in the Illinois Senate and House to vote against the bill.

The 54-year-old Meeks is allied with Americans for Truth, a Naperville organization which the SPLC labeled as a hate group earlier this year.

"Oh, great. So, our right to basic equality would depend on his whim? That is not acceptable," openly-gay State Rep. Greg Harris (D-Chicago) told FOX Chicago News on Saturday.

"Of the many, many names circulated to run for mayor Senator James Meeks is the most troubling," Equality Illinois public policy director Rick Garcia told ChicagoPride.com on Friday. "Meeks has been an ardent foe of equality and fairness for LGBT people."

The election filing deadline is December 13.