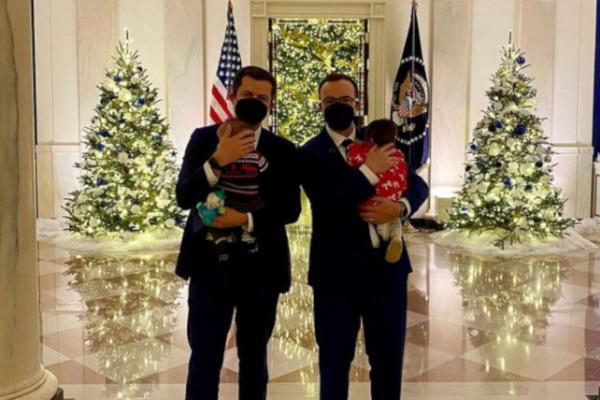 A real estate broker who hurled homophobia online at Secretary of Transportation Pete Buttigieg and his husband Chasten has lost his job.

The Buttigiegs, who married in 2018, announced in September the arrival of their first two children, daughter Penelope Rose and son Joseph August.

Over the holidays, they posted a photograph of themselves holding their children in a Christmas setting at the White House.

“2021 brought with it many challenges, but it also gave us a lot to be grateful for.” Chasten Buttigieg wrote in posting the photo on his Instagram account. “#HappyNewYear, friends. Here's to a peaceful and joyful 2022!”

Buttigieg posted a screenshot of a comment to his Instagram Stories, noting the user's place of employment.

"In the year 2022, you'd think these people would be wise enough to post their homophobia from an alt account, not one easily connected to their job," Buttigieg captioned the screenshot. "Rather embarrassing for @AmericanHomes4Rent, a company that claims to be an equal housing provider and one that's 'building a culture of inclusion and belonging.' I worry for your tenants.”

In a follow-up post, Buttigieg posted a screenshot from a comment left by Skyline Properties in Seattle, Washington, where Kravchenko is listed as an independent broker.

Scott Hotes, who is listed as a vice president at Skyline, wrote: “To all who are posting. Skyline could not possibly know what 1,200 of our independent contractors could be doing at any given moment. There is no way on gods [sic] green earth that you, me air [sic] anyone else could know in advance what someone might think or post. Now that I am aware of the post, I will have a conversation with the broker.”

“This defensive response tells us exactly how that 'conversation' is going to go,” Buttigieg wrote in the caption.

On Wednesday, Skyline Properties announce that Kravchenko was no longer employed by the company.

"After spending time to properly review the comments made by this individual, we have found that this was not some fluke, mistake, or hacking situation, and have promptly FIRED him from Skyline Properties," the company wrote on its official Instagram. "That being said, we would like to sincerely apologize to the Buttigieg family and the LGBTQ+ community for any harm that came from the bigotry of this individual. We do not tolerate ANY hate speech of any kind, nor do we have a place for ANY brokers who participate in such hateful behaviors."

On his professional Facebook page, Hotes revealed that he is the “proud father” of “a 27 year old non-binary/queer child” and that he has previously dealt with “this type of bigotry.”