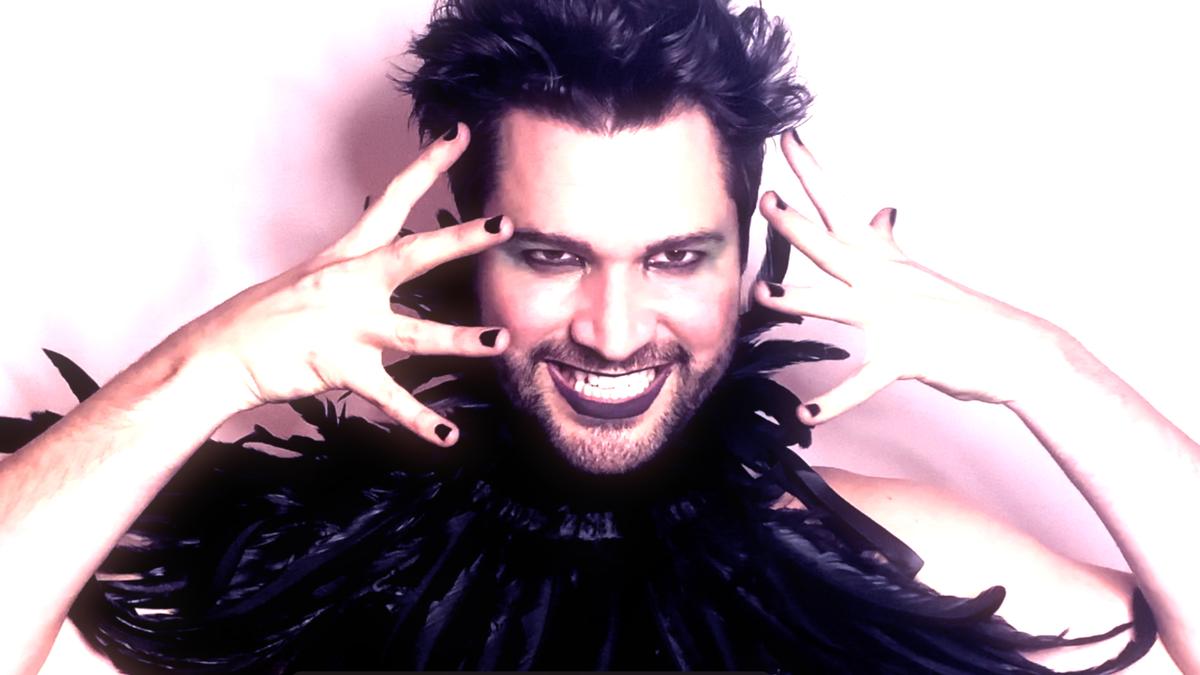 Brandon James Gwinn sports black nail polish, naturally, for his just-released new single: Black Nail Polish, a guitar-laden, Hedwig-sounding, rock track about the price paid at breakfast after a night of partying. The music video transforms a typical day at the office into a frenetic night in the queer dungeon sex club.

Gwinn wrote “Black Nail Polish” and co-produced it with M.P. Kuo.  The song is a marked departure from the heavily country-pop sound of the other tracks on his BULLIT album.  “Black Nail Polish” is distributed by Indie Chameleon and is now available on Apple Music, Spotify and all digital platforms.

Gwinn was raised in suburban Nashville, and admits he began wearing black nail polish in middle school: “Probably because Carson Daly wore it on TRL,” he said.

Gwinn is a musically multi-talented, award-winning singer/pianist, composer/lyricist and producer. He also has had a lengthy career in theatre, writing 10 stage musicals that have had various levels of production from college to regional and even Off-Broadway. In addition, Gwinn produced two albums for RuPaul’s Drag Race All Stars winner Trixie Mattel: 2017’s Two Birds and 2018’s One Stone. Gwinn performed on both.

“You’ll See” is a duet, Gwinn and Alexa Green, who played Glinda the Good Witch in Broadway’s Wicked!

“The emotions in the story of ‘You’ll See’ come from a couple of relationships I have been in, specifically, moments in two of my relationships where the decision to stay together or part ways was something we were heavily grappling with,” said Gwinn, who now lives in New York City – and came-out at a party in college in the early-2000s.

“I was making out with a dude. No one blinked an eye. There was probably Smirnoff Ice involved,” he said about his coming-out.

“You’ll See” casts Green and Gwinn as lovers who must figure out how to stay together or how to move on. “I wanted the video not to be about that so much as the milieu the music creates,” he said. “I also wanted to showcase what it’s like to be in the studio with friends and amazing artists like Alexa and M.P. Kuo.

“The first time I saw the final cut of the ‘You’ll See’ video I was really moved. It means a lot to me to see Alexa and me working together. We’ve been friends for so many years and have worked on so much music. This is a beautiful way to get the song out there and at the same time have a visually compelling tribute to our friendship. We are both musicians through and through and we also have the best time. The laughs are truly nonstop.

“Working with your bestie isn’t always a dream, so I heard. But working with Alexa is. She is the dreamiest of dreams. She is such a pro that you know, (from the start), things are going to be great and accurate. Then, you can play and see what variations and colors she can bring to the music. She’s also like a sister to me and we play-fight about my hats which she usually doesn’t care for. We usually can be found cackling around a bottle of prosecco or champagne-like two witches missing a cauldron.”

Gwinn and Green met working on a show that he was writing for the New York Theatre Barn. She was called in by a friend or a casting director. “All I know is, she came in to read and sing for a role and I was knocked out by her talent and personality,” Gwinn said.

Gwinn’s legacy certainly runs through RPDR, as he produced and performed on two of Trixie’s albums and a single, and he opened for her on her North American tour (Now With Moving Parts). “Trixie is a genius, a shrewd businessperson, and an over-the-top talent. From comedy to cosmetics, to songwriting and performing. The woman can do it all,” Gwinn said. “I am so proud of the work we did on Two Birds and One Stone, the latter of which being No. 1 on the Billboard charts.  I learned so much from my collaborations with Trixie. Opening for her on tour was life-changing and challenging. I had a front-row seat for her meteoric rise. There would be no Brandon James Gwinn solo albums if it weren’t for her.”

On Stage With … Brandon James Gwinn

Dating: “I have been with my amazing partner for three years now.”

Strictly Chicago: “It is one of my favorite cities. I have great friends who live there, and I’ve never had a bad time. We premiered Trixie’s second album there and had a great couple of stops there on tour. I’ve also seen some amazing drag, music and theatre there. I’m always excited to (go) back to Chicago”

More Chicago: “Boystown is a great gay bar scene. I love to go out in Chicago and bar hop. Chicago is a beautiful city. I run along Lake Michigan whenever I’m there. Also, I have some close friends in Chicago and we tear up a mean boozy brunch on the weekends. There’s some of the best drag in the country in Chicago. I have been really impressed with the queens I have seen there. Incidentally, I was also there the first time I ever heard Lizzo and that was, of course, life-changing.”

Even More Chicago: “We released One Stone the day after Trixie won All-Stars 3 in 2018 in Chicago at Roscoe’s. We had no idea if she had won or not until it was on TV. It was a wild and special moment for our collaboration and, I think, drag music at large. Who thought this 7-foot barbie doll was going to make original folk music work?? We played onstage at Roscoe’s the next night to a sold-out crowd, and the album was No. 1 on the iTunes Top Albums chart, and eventually on the Billboard chart. It will always be a special memory of that time in my life that is intrinsically tied to Chicago and Boystown.”