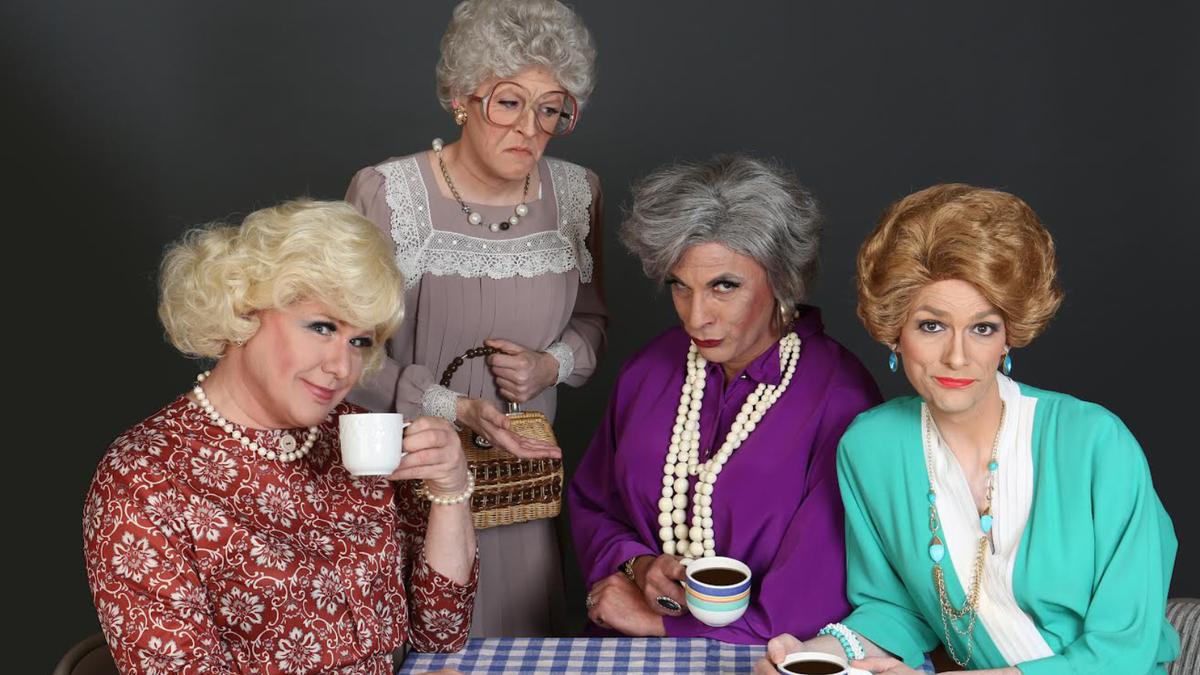 Fans of the beloved Golden Girls will descend upon Chicago from around the world when the 3-day Golden-Con: Thank You For Being A Fan convention celebrates everything Betty White and beyond.

Local organizers have spent more than a year prepping for the event, which was announced in late-November to celebrate friendship, laughter, and being a fan of the popular TV sitcom.

Golden-Con is scheduled for April 22-24 at the Center on Halsted and other Northalsted venues.

“As a hardcore fan of the show, I have about a zillion t-shirts with the girls on them. People stop me nearly every time I wear one in public to let me know how much they like the shirt,” said Zack Hudson, who lives in Chicago and long contemplated a 1-day special event with a headliner and vendors to celebrate The Golden Girls.

He then approached Brad Balof with the idea. Balof wanted to go bigger.

“Brad immediately bought in and, within five minutes, he convinced me we needed to expand my one-day fan forum idea to a full weekend of events for fans that can include as much of the Northalsted neighborhood as possible,” Hudson said.

“I knew it would be a hit,” said Balof, the general manager of Sidetrack.

Golden-Con organizers are still fine-tuning the event, but even a casual fan of these four legendary women who share friendship and a home in Miami will be hooked. There will be a Golden Walk of Fame, filled with guest stars and folks from the show. There will be a Richmond Street interactive gallery exhibit that will might Instagram on fire. There will be a Mother of a Solid Gold Dancer disco party, plus a St. Olaf Story Slam. “We’ve rounded up a host for Grab! That! Trivia! Dough!,” Hudson said.

The event also will feature writers and producers so attendees can hear backstage gossip.

And Betty White herself.

Obviously, event organizers are and will be doing everything to convince White, who will be 100 next April, to attend.

“That’s my No. 1 goal. I want the First Lady of American TV to headline the fan event,” Hudson said.

Balof added, “I also would like Betty White to be involved somehow.”

Balof also hopes to have RuPaul involved, somehow, as RuPaul “counts The Golden Girls as his favorite show.”

They are hoping for 1,300 to attend the 2022 Golden gala. And, organizers are hoping to entice show director Terry Hughes, creator Susan Harris and executive producer Tony Thomas to attend.

Tickets for Golden-Con will go on-sale in mid-January.

“We’re making every effort to keep things as affordable as possible to include as many folks as possible. It looks like tickets will start at about $40 and rise a couple times from there,” Hudson said.  “Week after week, we get bigger and bigger. Brad and I each share our ideas and then we go after them. This event has live shows, a vendor market, an Instagram space we’re calling the Richmond Street Gallery, and much more. We’re booking folks for behind-the-scenes panel discussions. We’ve got interactive fan events which will take place on a big, central mainstage. And it will all pay off in a huge finale performance and costume parade Sunday.”

So, what is the lasting appeal of The Golden Girls, a show that originally aired from 1985-1992, with 180 half-hour episodes, spanning seven seasons, starring Beatrice Arthur, Betty White, Rue McClanahan, and Estelle Getty.

White answered it best when she once said, “It’s funny.”

“Another thing that makes it work so well for so long is that the four main characters can read each other and drag each other, but we know they have an abiding love and respect for each other,” Hudson said. “They’d do anything for each other. And who doesn’t want a loyal squad of friends who you can share your life with and who will support you through life’s ups and downs.”

Balof added, “It was the perfect TV sitcom formula: (a) brilliant idea from Susan Harris, perfectly cast and impeccable writing with an overwhelming amount of timeless humor.”

Hudson said he’s been hooked for decades, enjoying the laughs with his grandmother, Dinah Hudson, on their black-and-white portable TV.

“I remember where I was when I saw the final episode,” he said. “I’ve been a fan since damn near the beginning.”

Balof watched The Golden Girls years ago with his family, particularly his brothers and mom. “When it came back in syndication via Lifetime and the Hallmark channels, that is when I realized how formidable the show (was),” said Balof, who tagged himself as Blanche.

Hudson is a bit more Rose.

“I’m from Georgia, much like Blanche. And we might share a few other characteristics,” he said. “But I’m probably much closer to being a Rose. I can be a bit of a soft touch. I’m proud of where I came from. And I’ve been known to overestimate any fondness folks around me might or might not have for my storytelling.”

Laughing With The Golden Girls

Zack Hudson on Betty White: “She’s given anyone who cares to pay attention a century of goodwill, immutable charm, and sharp comedy instincts. She’s a living example of the power of positive thinking and trying to maintain a positive outlook. She was born in Illinois. She’s my hero. May God bless her. And I wouldn’t turn down another century of Betty White.”

Brad Balof on Betty White: “Betty is a cornerstone of not only American television, but of American history.”

Center On Halsted: “The Center on Halsted is kind of the unsung hero in this story. They’re bending over backwards to accommodate us and our requests. I had Sidetrack in mind initially and I had hoped to one day to grow into shape to rent Center on Halsted.  But Brad immediately started thinking bigger. Another (reason for) choosing Center on Halsted is that Brad and I both work in Northalsted. We each work for places we hope can benefit from tourism dollars associated with Golden-Con. The Center on Halsted is just the perfect venue to realize that dream.”

Hell in a Handbag Productions, from Hudson: “They are our first booked headliner. And, after Center on Halsted, they’re the first Chicago organization we contacted about Golden-Con.  I have two jobs. It takes a lot to get me out at night when I’m not working. Whatever I’m going to needs to be level-10 for entertainment. I don’t miss a Hell In A Handbag show — especially when they’re performing their “The Lost Episodes” parody shows. They’re fresh, hilarious, and when it comes to parodying “The Golden Girls,” they capture the heart, the emotional center, of the show. And then they turn everything else ass over tea kettle for huge laughs.”

More Hell In A Handbag Productions: “The actor who plays the Blanche-like character auditioned for the part of Blanche on the same day I was trying out for it at an open-call. I remember being so impressed with that actor’s mastery of the Blanche-isms that I thought to myself something, ‘They’re stupid if they don’t cast him.’ Turns out we were all on the same page.”

More Golden Girls, from Hudson: “This is a convention for fans. It’s not a Golden Girls convention. It’s a big gathering for fans of the show. We’re going to gather to laugh and celebrate something we love.”

Golden Girls, from Balof: “The fanbase for this iconic show is vast; it crosses demographics of age, gender, race, sexual orientation and gender identity, socio-economic status and geographic location.  This event is to celebrate the connection between the fans.  And maybe, in a small way, celebrate the idea that while there may be many things that separate people on the surface, there are things that everyone can share: friendship, chosen family, laughter, and maybe some cheesecake.”