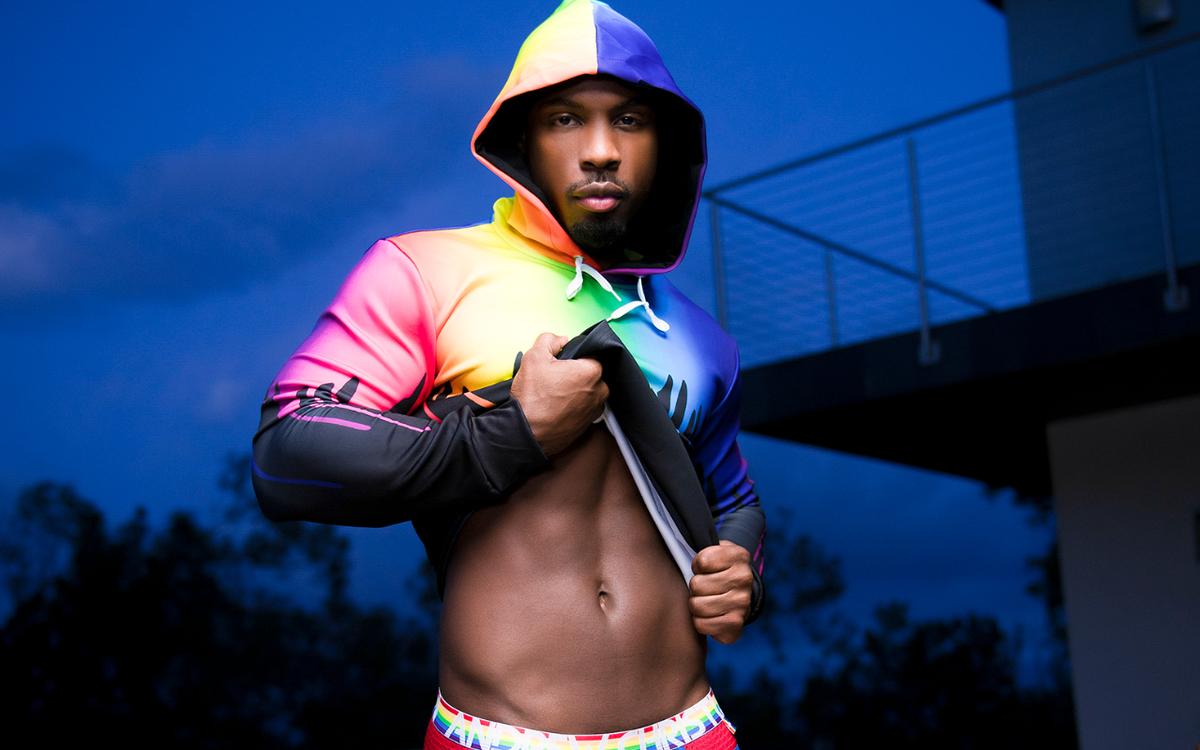 The film follows the lives of four gay men of color as they navigate their way in the competitive and often complicated adult film industry. Through interviews with the men in Chicago, New York City, Las Vegas and Los Angeles, the film examines their unique experiences, including racism, stereotypes, inequality and more.

“This is a conversation that needs to be had,” Jackson said.

The film talks about Black men being cast in servant roles or as thugs, and dealing with white men who refuse to perform with them because of the color of their skin. There also is talk about the stereotype that Black stars are expected to have large penises – and they're made to bottom when they do not).

“We wanted to showcase the pros and cons of every side of the industry,” Jackson said. “Already from the trailer I see a ton of support, however, there (also) have been some mumbles, (such as), why those cast members (and) why is he attacking fan content? To be honest, it was hard to cast this project. I reached out to so many of your favorite stars and they were afraid to speak out. The industry has created this energy that if we speak out, we will be blacklisted. It broke my heart that some only could share their stories in private or off-camera.”

Jackson, the first black man to win a GAYVN Best Actor Award in 2020 and the GAYVN Performer of The Year 2021, started in adult films while in college. He was studying criminal justice and wanted a unique way to make some money.

“To be honest. I had been intrigued with sex and adult films for a long time. Maybe because I was a virgin (at the time), but I felt like, 'I can do that (and it) might be fun,'” he said.

And boy has Jackson seen a bunch over the years, including the negative, such as, “from literally making pennies, being spoken to in tones that were not appropriate, and not having any control over the scenes I was performing in,” he said. “I wanted more for DeAngelo Jackson. I wanted to be able to reach goals that most men of color were not expected to achieve.”

Years ago, Jackson said, the studios made all the decisions. Now, “the talent is deciding what works for their brand and (they are) able to hear first-hand from their fans,” he said. “Also, the Black Lives Matter Movement has sparked executives to examine their pre-existing views on the BIPOC content they are creating.

Jackson added, “Each day we see some progress and then we see a setback. My thing is, when setbacks happen, we need to reset and keep pushing things forward. The BLM Movement affects you no matter what industry you're in or who you are. I want people to take ownership as to how they have contributed to these issues and stop passing the blame. And I'm speaking to everyone, from studios to talent.

“Last year was a hard one. No one was working due to the pandemic and when it came to me producing so much fan content, I grew tired of filming myself cooking in the nude. Hell, I'm not a cook. But I guess people loved seeing me cooking my noodles in the nude. Luckily, I shot so much before the shutdown that I had scenes coming out (to keep) me relevant. Also, my management team worked on creative ways to keep me relevant which worked since I won the GAYVN Performer of the year and a Grabby for Best Actor.

“I am so grateful for what platforms that specialize in fan content have done for our industry. I do hate that studios have been impacted, however, if it weren't for those alternative platforms, people wouldn't have been able to even eat,” last year.

When asked about the BLM, Jackson said he has mixed feelings. “On one hand I'm happy that these challenging conversations are happening. On the other hand, why has it taken so many of us to lose our lives to start this dialogue?” he said. “I sit at night watching the news some days in tears as to seeing what's happening in the world. Only recently have we started doing something about it. And most people still aren't addressing what's happening in the trans community. My sisters are losing their lives and many cisgender people do not say a word.”

Jackson said they were not planning to delve into fan content in the movie, but it came up organically. It was suggested they include fan content, as fan content stars “are changing the game,” he added.

“I know I can't perform forever, so it has been important for me to add other skills to my resume,” such as working behind the camera where, he said, “it's definitely a lot different than just showing up and performing,” in front of the camera.

“This documentary was honestly created for the industry as a whole. I wanted it to let the industry know how we are feeling. I also wanted individuals outside of the industry who often judge performers to get a glimpse into our real life. That may seem selfish, but I think it's important so that we can learn to respect each other.”

On Screen With … DeAngelo Jackson

On being the first Black man to win a GAYVN Best Actor Award in 2020:

“I'm still in shock. That award wasn't for me though. It was for all my BIPOC performers who haven't received the recognition they deserve. They are starting to finally see us and it's a beautiful thing,” he said.

On winning the GAYVN Performer of The Year award 2021:

“Again … they finally see us!  I dedicate this award to each performer who felt they couldn't speak up, and the ones who were brave enough to do so.”

Coming-Out: “I wasn't given the opportunity to come out because I was outed by a family member.”

Chicago: “I LOVE Chicago so much. I miss doing public appearances there and the deep-dish pizza.”

Favorite Things to Do in Chicago: “Eat, Eat, Eat.”

Chicagoan in The Film: Rock Rockafella – “Rock has been like a mentor for me. He directed my first scene and has successfully launched his own studio. He really inspired me to understand that I need a plan after performing. Rock started off on-camera and (is) now creating his own content. Rock has an incredible story and it's one that needs to be heard.”

More Rock Rockafella: “Rock has a unique perspective as an owner of a studio. We need to hear from him to know how this industry continues to evolve. When I reached out to him, he offered all his resources and jumped onboard. I love my brother so much.”