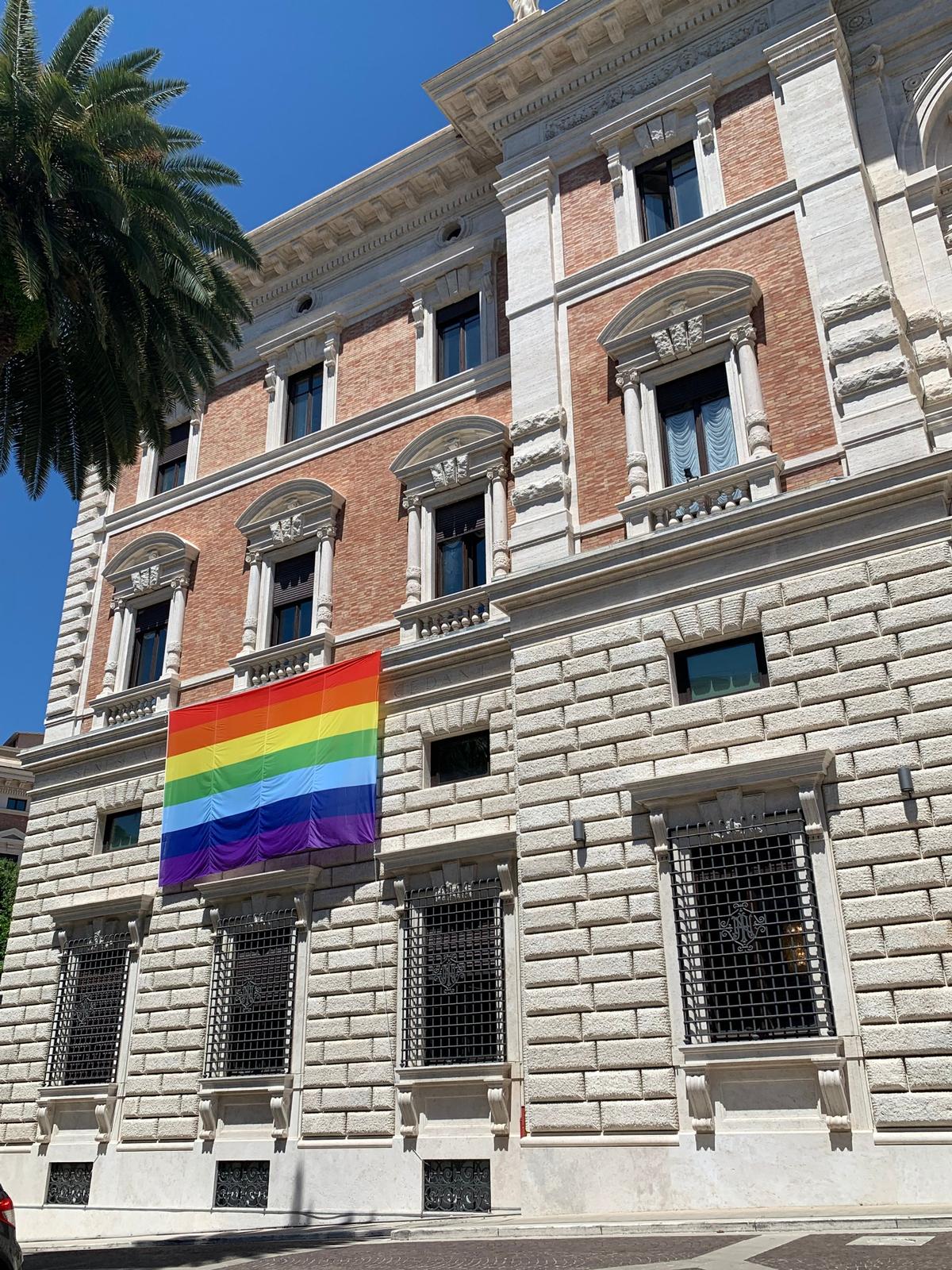 photo credit // https://twitter.com/usinholysee
The U.S. Ambassador to the Holy See is now flying the rainbow Pride flag over the embassy at the Vatican. This is in keeping with the spirit, not a mandate, of President Joe Biden's Pride month declaration.

The embassy issued a statement on Twitter saying, “The United States respects the dignity and equality of [LGBTQ] people. [LGBTQ] rights are human rights.”

U.S. embassies around the world were told by Secretary of State Antony Blinken that they were allowed to display the Pride flag—even on the same staff as the U.S. flag.

However, foreign missions were told to consider abstaining if the flag would create opportunities for violence against the mission.

In the previous administration, Secretary of State Mike Pompeo forbade the display of the Pride flag at foreign mission sites.

Despite pleas by Pope Francis for Catholic leaders to refrain from politicking against LGBTQ rights, American bishops have been openly lobbying against the passage of the Equality Act.

The U.S. Conference of Catholic Bishops—popularly known as the USCCB—believes that the pending civil rights law would remove their right to discriminate based on the teachings of the Church.

The Equality Act currently languishes in the U.S. Senate, whose vote is needed to pass the law.

It would finally put in place federal civil rights protections for banking, housing, employment, public accommodations, among others, across the country for LGBTQ people.

The USCCB sent a letter to the U.S. Senate in opposition to the Equality Act before the pandemic changed the course of legislative priority.

“[The Act] fails to recognize the difference between the person—who has dignity and is entitled to recognition of it—and the actions of a person, which have ethical and social ramifications. Conflating the two will introduce a plethora of further legal complications,” the association said.

They also argued against transgender rights under the law.

“This risk arises not so much from those who experience gender incongruence, but from others who would take malicious advantage of open-door policies in these private spaces,” they said about allowing transgender persons to use the bathroom that matches their gender identity in Church-owned properties.

The letter also argues that it would force them to mix “biological sexes” in homeless shelters and force them to place children for adoption with same-sex couples—against the teachings of the Church.

There is a minority of bishops and archbishops of the USCCB that do not support the association's movement against the Equality Act—while others have maintained neutrality and silence on the issue.

Cardinal Wilton Gregory, archbishop of Washington, D.C.—a Francis appointee—has promised to have regular dialogue with Biden on such issues separate from the USCCB.

The U.S. Embassy to the Holy See celebrates #PrideMonth with the Pride flag on display during the month of June. The United States respects the dignity and equality of LGBTQI+ people. LGBTQI+ rights are human rights. pic.twitter.com/Xentlnr16E
— U.S. in Holy See (@USinHolySee) June 1, 2021