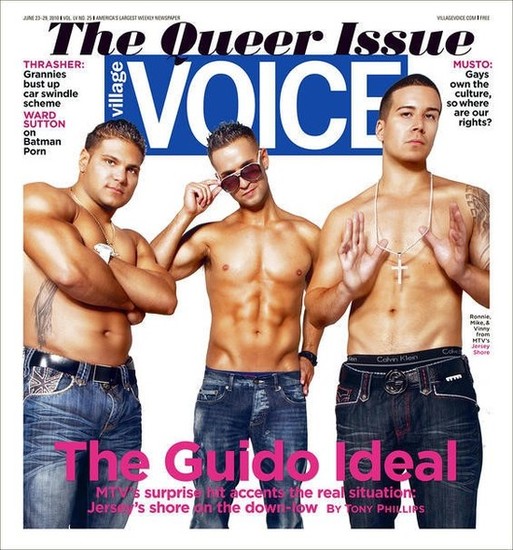 'Village Voice' didn't mention the theme to the reality stars

Asbury Park, New Jersey - The new issue of the Village Voice is "The Queer Issue" and the coverboys are Mike "The Situation" Sorrentino, Ronnie Ortiz-Magro and Vinny Guadagino from "Jersey Shore."

The headline below their picture reads: "The Guido Ideal: MTV's surprise hit accents the real situation/Jersey shore on the down low."

The thing is, the men of "Jersey Shore" are (ostensibly) straight and they were apparently not told just how their pictures would be incorporated into the magazine.

The New York Post claims it's a bit of a scandal, but E! Online tracked down one of the Jersey boys and he said he doesn't care.

"I don't give a s--t, man," Guadagino said. "I've done so many photoshoots and they're pretty much all the same. I go in there, do my thing, take my shirt off, get my hair and my make-up done and they dress me. I take the pictures and wherever they end up, they end up."

Sorrentino has also talked about his gay fans.

"I'm flattered if there are guys with different preferences that have crushes on me," said Sorrentino a few months ago. "I'll be honest, I like the attention."

The article that accompanies the photoshoot follows a gay resident of Asbury Park, New Jersey, named Craig Austin. Austin hosts parties for young men on the downlow, and he gets quite a crowd.