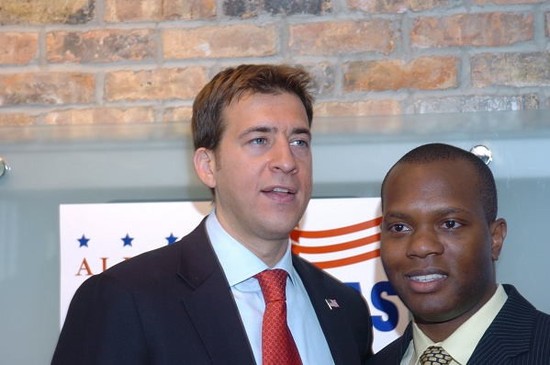 alexi giannoulias at the center on halsted

"Ten years from now, we will look back in amazement that we denied full and equal rights for LGBT Americans," Giannoulias said during the press conference at the Center on Halsted in Chicago's Lakeview neighborhood. "I look at the issue of LGBT equality as one of basic fairness. I was raised to believe that all people are equal, and that we should judge one another by our actions and ideas – not by our race, our religion or our sexual orientation."

Giannoulias was joined by prominent leaders in the Illinois LGBT community including Art Johnston, Alderman Tom Tunney, State Rep. Greg Harris and State Rep. Deb Mell, who last week announced her engagement to her partner on the Illinois House floor.

Opening the press conference at the LGBT community center, Mell referred to Giannoulias as the first statewide candidate to fully support marriage equality rights. "I look forward to him being very active on our issues and furthering our cause in Washington," she said. "I know what's in Alexi's heart because I have seen him fight for equal rights for the past four years."

During the 15 minute press conference, the Illinois Democrat highlighted his commitment to marriage equality, the repeal of 'Don't Ask, Don't Tell' and the Defense of Marriage Act and promotion of employment non-discrimination and tax quality. Giannoulias also took aim at his Republican opponent, Congressman Mark Kirk.

"I'm proud to stand on the side of fairness, of decency and of common sense," Giannoulis said in closing.

Kirk's campaign website, www.kirkforsenate.com, makes no reference to any LGBT issues. He is seen as a political moderate.

The Kirk campaign did not respond to requests for comment from ChicagoPride.com.

Things to do in Lake Geneva this fall