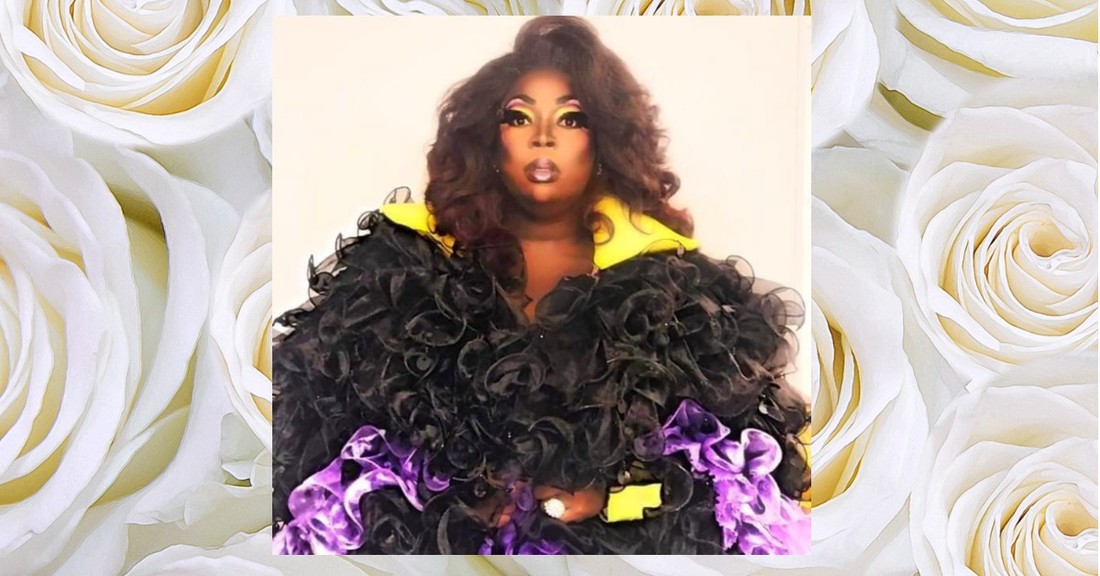 Beyonce-loving drag queen had a ‘passion for performing’

To anyone who watched GiGi Mayonaé perform, including fellow drag queens in Chicago and her native Danville, she was a fierce, twirling diva who loved what she was doing – and it showed.

Mayonaé was the entertaining alter-ego of Jherrion Bates – a kind, loyal friend, "with a heart of gold," said Jonathon Reed, of Decatur, who performs as Magenta Roze and was friends with Mayonaé.

"The first thing I noticed about her was her passion for performing," Reed said. "She taught all of us new queens to keep going, even when you doubt yourself."

Now the drag community must, somehow, keep going – without Mayonaé.

Bates was seriously injured in a traffic collision in the heart of Boystown on July 18. Bates was driving his white Ford Fusion in the 3500 block of North Halsted Street when another driver swerved around a third driver and struck Bates head-on, according to a police report.

The impact from the collision forced Bates' car to hit a parked, unoccupied vehicle on the street while it set the colliding car on fire. Video of the aftermath of the crash was posted to YouTube by local news outlet CWBChicago.

Bates, of the 6100 block of South Dorchester Avenue, was taken to Illinois Masonic.

The other driver, Gerrik Birt, 29, also was taken to Illinois Masonic for treatment and was later charged with felony aggravated driving under the influence and causing bodily harm as well as misdemeanor driving under the influence and driving without insurance, according to police. He also was cited for not staying in the driving lane, not reducing his speed and not having a license.

Birt had a blood alcohol level of 0.253, more than three times the legal limit, according to the police report.

Bates updated his recovery multiple times via social media over the weekend.

Sadly, he was pronounced dead Sunday afternoon at Advocate Illinois Masonic Medical Center, according to the Cook County medical examiner's office. An autopsy performed Monday determined Bates died from a combination of a blood clot in his lower right leg and blunt-force injuries to his right hip because of the crash, along with obesity, according to the medical examiner. His death was ruled an accident, the Chicago Tribune reported.

"I don't know if I have all the words just yet," said August Francis (Hunny Mayonaé). "GiGi was not just my drag mother ...she was my friend.

"She contributed so much to who I am now and who I'll be in the future. She was hosting the talent nights that gave my boyfriend his first big step into the world of drag and I'm forever grateful for that. Whether it was bumping down the street to Lizzo, performing by her side on stage, supporting her through this entire Chicago journey, or picking up the phone at 3 a.m. just to gossip ...she was such a presence in my life."

I'Yanna Starr, a drag performer from Decatur, admitted that the first time she met Mayonaé, "I fangirled over her so hard."

"Her legacy was phenomenal; she showed me that I could do anything I set my mind to," said Starr, who noted that Mayonaé's "outgoing personality, her eight-counts and how much she cared about her community" will be her lasting legacy.

Starr will perform I Can't Turn You Loose by Otis Redding in the future – and always then remember Mayonaé. "She loved that song," Starr added.

"She meant (so much) to a lot of us. She was fearless, the kind of queen I lived for. She never used her size as an excuse. She worked hard and dreamed big. She was like a big sister to me; she always gave me advice on how I can get better as a performer. She was humble and gave people opportunities to show themselves, and she loved her sisters.

"She was the type of person (who did everything) to help someone who really needed it; that was my sister and I will respect her and love her for her contributions to the drag scene and how she changed my life."

Mayonaé had an obsession with Beyoncé, many fellow drag queens noted – and she loved Church's Fried Chicken. She was ambitious and outgoing; her energy and her smile long will be remembered.

"GiGi was just a loving, caring person. She was talented and humble, a joy to be around and a wonderful listener," said Raymond K. Cleveland, the drag performer Coco Sho-Nell. "The first time I met GiGi was at Charlie's Nightclub. She absolutely blew me away with her performance and I was excited to see another plus-size queen (who) can dance and entertain. We started talking shortly after that and really began to bond."

Mayonaé moved to Chicago to pursue her drag career – and Sho-Nell recalls the time they kiki'd after a show at Hamburger Mary's. "I remember so clearly saying, 'I'm optimistic about the future of drag with entertainers like you,'" Sho-Nell said.

"I will always remember our talks behind the scenes, talking about life and about the Chicago nightlife scene."

Sho-Nell will be at Charlie's on August 7 for a Mayonaé tribute show, "and I will be doing two of her mixes to pay homage to the wonderful queen she was and forever will be," she said.

Dymond C. Calloway, of Chicago, was friends with Mayonaé for four years – and said there are "too many (memories) to name. Mayonaé was fun to be around and genuine. "She kept it 100 percent with you no matter what," Calloway said.

Mayonaé was Calloway's first official drag child. "I know that my legacy would have lived on through her," she said. "Now I have to continue on with hers, so that future generations know to never give up on (their) dreams. Her tenacity was unmatched."

Calloway added, "(When) I asked her to be my drag child, she accepted without hesitation. While we had many things planned, I know that she had accomplished what she could before her untimely passing. She taught me to be fearless and to go for what I want, and I will forever be grateful to her for her friendship and her love."

Melvin Pirtle Jr., of Decatur, was known to Mayonaé and others as PoisonIris Carrington – and the two had been friends since 2016 after meeting at the now-closed Chester Street Bar in Champaign when both had just begun performing in weekly talent night competitions.

Mayonaé talked Pirtle into doing drag for his 22nd birthday in a talent show that she hosted.

"I was so nervous to perform in full drag for the first time, (but) she reassured me every step of the way that I (would) be amazing," Pirtle said. "That night, (she) helped me put on my first wig. Since that night, my life has completely changed; everything I (now) do revolves around my drag career. It's my passion and I never would have discovered that without the push I got from GiGi.

"GiGi's talent opened doors for her and it was always her prerogative to help her sisters come up, too. She took me with her on multiple gigs out of town and (out of) state to expose me to different drag scenes and get me more experience. She was always doing everything she could to help me grow as a drag queen and though she didn't know it at the time, she helped me grow as a person, too.

"I'll never forget the night in the car, on the way back to Danville after a gig in Indiana; we talked about our pasts and our childhoods. (It was) a conversation that brought tears to my eyes as we related on so many topics."

They also that night talked about the things they wanted to do in the community to make things better for the next generation, Pirtle said.

"GiGi held multiple Drag Queen Story Hours in Danville, touching the lives of so many children (and) showing them it was OK to be different," Pirtle said.

PoisonIris Carrington had her first-ever show in Decatur, her hometown, last year on her 23rd birthday. After her first number, Mayonaé came over, with tears in her eyes, to say how proud she was and how happy she was "to see me grow into the performer (I became) ...I teared up, thanks her and we hugged."

"I believe GiGi's legacy is, perseverance. If there's one thing she taught me, it's that if I want something, I just have to go out and get it. GiGi always persevered, no matter what stood in her way or how many times she was knocked (down) ...she just kept coming back and kept working harder. Even when she was going through a difficult time, she did it with a smile on her face, and was kind and loving to everyone she came in contact with."

PoisonIris Carrington also is scheduled to perform at the benefit show August 7 at Charlie's and, no surprise, she will be doing a Beyoncé Sweet Dreams number in memory of Mayonaé.

Coco Sho-Nell reflected on the tears that have been shed for Mayonaé over the past week or so.

"This unfortunate circumstance has brought together the drag community," Coco Sho-Nell said. "I hope that, in light of everything, we all remember that life is a gift and to treasure the time we have here and treasure each other."

Here's a look at some of the fundraisers upcoming and ongoing to support Mayonaé and her family:

Friday, July 26, for Hype! Her? Hour! at Mary's Attic, starting at 10:30 p.m., and hosted by Her? and Dixie Lynn Cartwright. All tips will be donated to GiGi Mayonaé's family.

Friday, July 26 at Splash in Boystown: Always & Forever: GiGi Mayonaé – A Celebration of Life, starting at 10:30 p.m., and hosted by Elektra Del Rio. The performers' tips and a portion of the proceeds from every specialty cocktail will be donated to Mayonaé's funeral costs.

Saturday, July 27, from 2-4 p.m., at Mary's Attic: A dance party & drag show fundraiser for GiGi Mayonaé. Organizers said it will be a Beyoncé dance party and drag show to raise funds for her family, with a $5 suggested donation at the door. All tips the drag performers receive will be donated to her family. The drag show line up has yet to be announced.

Saturday, July 27: Club Krave in south suburban Blue Island – show organizers will be dedicating the second half of the Drag Roulette show to Mayonaé. Showtime is 11 p.m.

Sunday, July 29: Lydia B. Ross is performing at Luxor Club in Lubbock, Texas. "Every tip and pay I receive on Sunday is going to my love, GiGi Mayonaé," said Patrick Sanchez, who performs as Lydia B. Ross.

Wednesday, August 7: Charlie's in Boystown is hosting Remembering GiGi Mayonaé to support her family to help with medical and memorial expenses. There will be an open stage for all performers, and all tips will be donated.

More than $700 was raised for Mayonaé's family at a fundraiser held Monday, July 22 at Jackhammer.

Click here to donate to the GoFundMe page set up for GiGi Mayonaé.

The funeral for Jherrion Bates is Friday, August 2 at New Life Church of Faith (1419 N. Bowman Avenue) in Danville. The visitation will be from 9-11 a.m., with the service set to begin at 11 a.m.