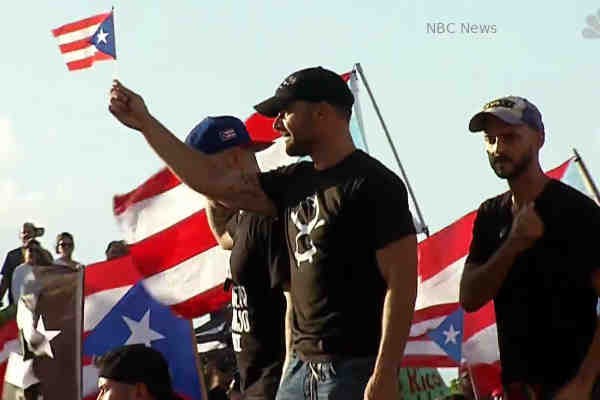 Ricky Martin and Lin-Manuel Miranda are among the celebrities calling for the resignation of Puerto Rico Governor Ricardo Rosselló over homophobic and misogynistic comments.

The controversy erupted on Saturday after 889 pages of messages on Telegram between Rosselló and several members of his administration were published. The messages include Rosselló using a gay slur to attack a journalist and a former senator. He also described a former New York City lawmaker who was born in Puerto Rico as a "whore."

Several involved in the group chat have stepped down, but Rosselló has defied calls to resign.

Martin, who was born in Puerto Rico, was among those targeted in the messages. Martin "is such a male chauvinist that he fucks men because women don't measure up," Puerto Rico CFO Christian Sobrino wrote. Sobrino is among those who have resigned.

According to NBC News, thousands took to the streets on Wednesday to call for Rosselló's resignation, including Martin, who is raising three kids with his husband Jwan Yosef. Other stars who joined the march included reggaeton stars Bad Bunny and Residente, and actor Benicio Del Toro.

"Rosselló has lost the people's trust in him and we are here to support that," Miranda told the hundreds of protesters who gathered in Union Square Park.

(Editor's note: In the wake of the news, the Chicago Boricua Resistance and its allies rallied in front of Federal Plaza on July 16 calling for Rosselló's resignation.)