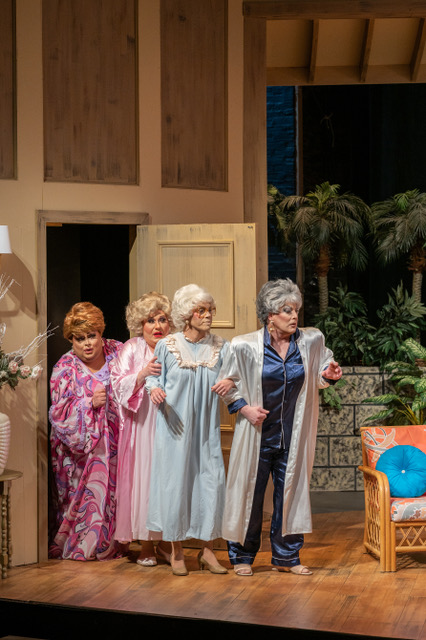 Airing from 1985 to 1992 with 180 episodes in total there are plenty of hilarious situations and over-the-top characters to pull from in this new show. Chicago audiences are quite familiar with drag queens portraying this elderly quartet thanks to Hell in a Handbag's seasonal shows, but this is a new batch of performers from out of town. 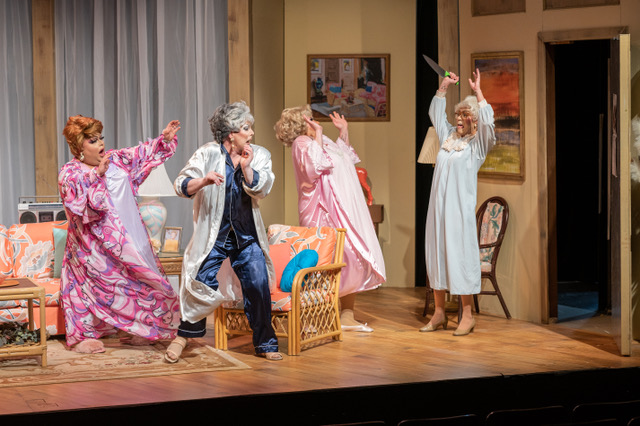 Local actor Jason Richards handles the secondary character roles with finesse and speedy costume changes throughout the over two-hour undertaking. You might hear a gay gasp in the audience when Grace starts speaking. Her voice is uncannily similar to Bea Arthur's tone and register. Some of it is natural, but when she tries other inflections somehow Grace sounds even more like the icon. It is eery and is everything that is needed to enhance the personification of Arthur. True to the original where Estelle Getty was the youngest in the cast but disguised to look older, so is Adrien. The well-studied imitations of Getty ground the biting humor associated with Petrillo in the exact same way it was done back in the day. 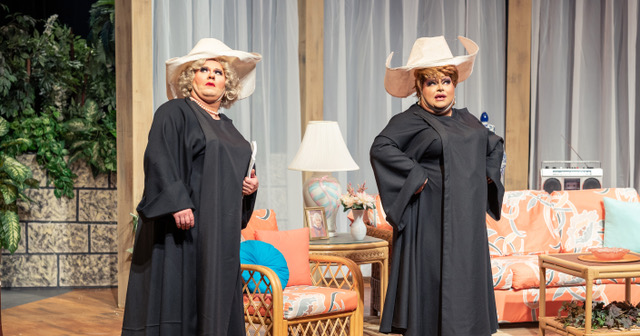 Not all of the jokes land every time and the ending needs a little tweaking, but overall there are many genuinely funny moments to be had with The Golden Gals Live!

"There's nothing sexy about a nun?" Well, I beg to differ, but Rose and Blanche make up for the insult by keeping the material moving including some bouncing habits on the set. The campy character walks and precise mimicking of the original actresses all pay off in this production. Even those unfamiliar with the original series will have fun with the awkward situations these Miami mavens find themselves stuck in.

Don't miss the Minj and friends at Mercury with tickets ranging from $39-$75 at GoldenGalsLive.com and MercuryTheaterChicago.com. Bring a little extra cash in your purse to purchase colorful merchandise and festive drinks at the bar. Remember what Blanche said, "Crying is for plain women. Pretty women go shopping!"