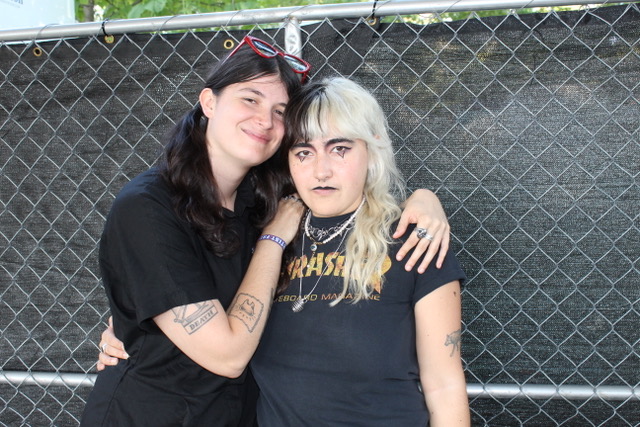 Riot Fest is a three-day festival that takes place at Douglass Park centering around rock music. From September 16-18, 2022 fans gathered to jam to their favorite acts, ride carnival rides and shop from unique vendors. The majority of the bands booked fall into a wide variety of genres in the music performed such as punk, alternative and hip-hop. This carries over into many of the performers' private lives and the openness of being a part of the LGBTQ+ community continues to grow each year.

Several of these talented individuals talked backstage over the weekend about their catalog of music and upcoming plans for the future. 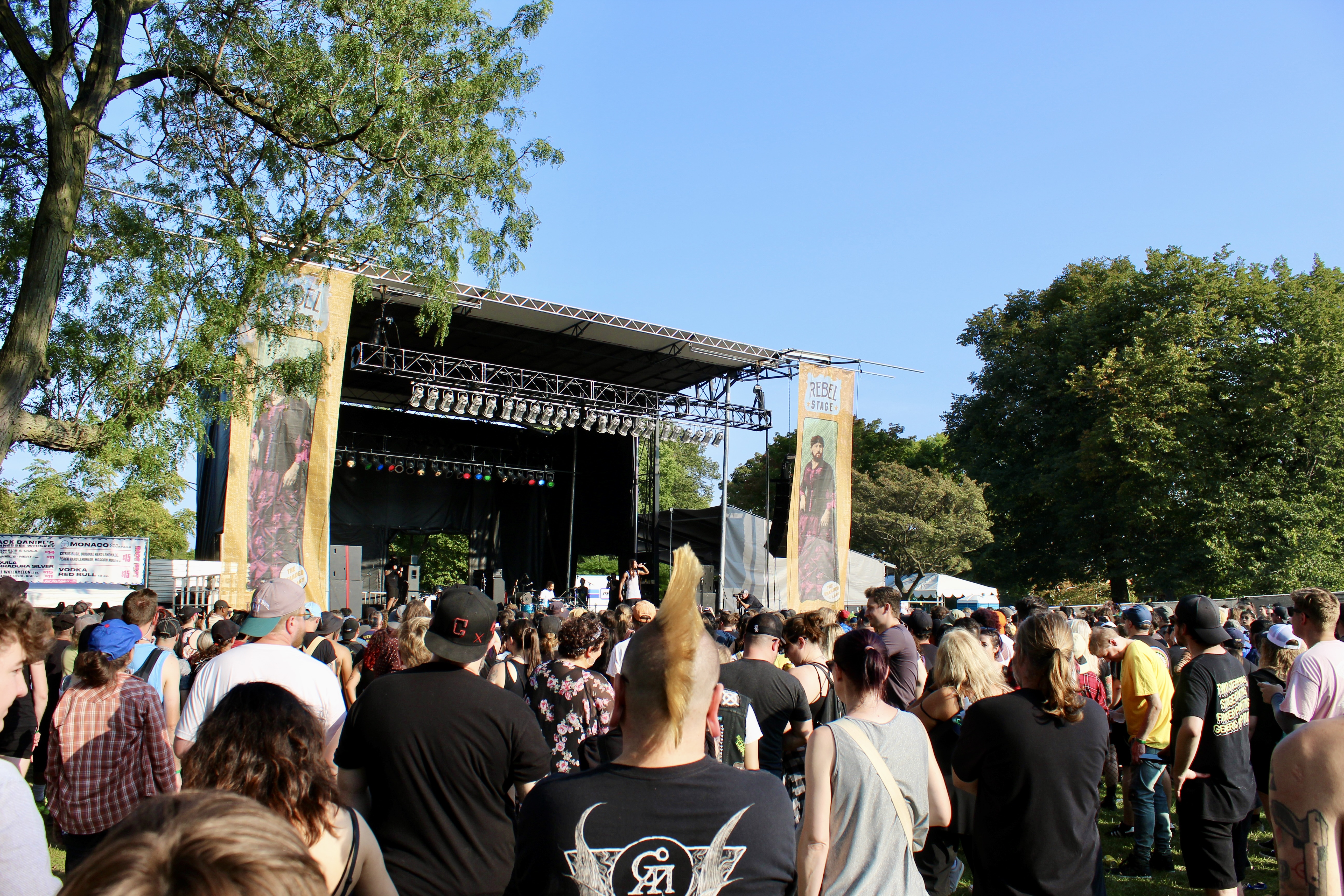 Punk band Destroy Boys talked backstage about queer identity and the name of the Sacramento group being born out of bullying trauma. Guitarist Violet Mayugba reminisced, "I was ditching school and my parents had given me a chalkboard for my birthday. These two dudes were being mean to me so I wrote “destroy boys” in pink cursive. Alexia and I had been trying to come up with a name for the band we were forming one day and we couldn't believe the name wasn't already taken!"

When asked about their cartoon video for "Muzzle" Mayugba explained, "That is our friend Olive Lagace who just emailed us one day to do the “Fences” video." Singer Alexia Roditis, who identifies as queer and uses they/them pronouns said they are a comic fan as far as graphic novels, "There is one called Girl in the World by Caroline Cash who is from Chicago. It's funny and feels like my life." 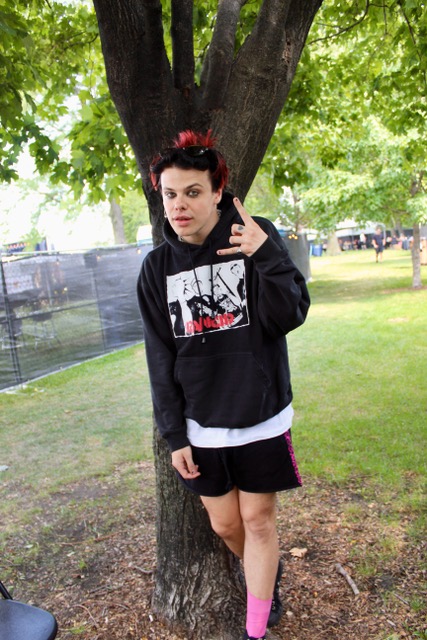 Mayugba chatted about playing Riot Fest, "This is a big festival for us so we are excited and nervous…I love seeing Alexia flip the switch, because they used to be very nervous onstage but now it is obvious that it is their calling. They always do a great job!"

The band is working on its fourth album and stated that they would like to try more genres of music with this project. “It will be exciting to condense it into one album as much as possible. I am ready for experimentation,” Roditis said.

Follow them on socials with Destroy Boys Band. Mayugba ellaborated, “The best way to reach us is to come to our shows. We have merchandise there and we play all the time on tour. Fans will see us live and they can meet really cool people at our shows!”

Roditis stated, 'We foster a safe space at our shows. I try to get mutual aid booths to come to the venue and it is a lot of work. Young people want to volunteer locally but don't know how. This can be an entry into their activism and adds another dimension to the show. I encourage other bands to do this also. Ideally, the venue will provide contacts for this in the future because they should know organizations in their own city. The program has a long way to go, but I am making it happen, not to toot my own horn!” 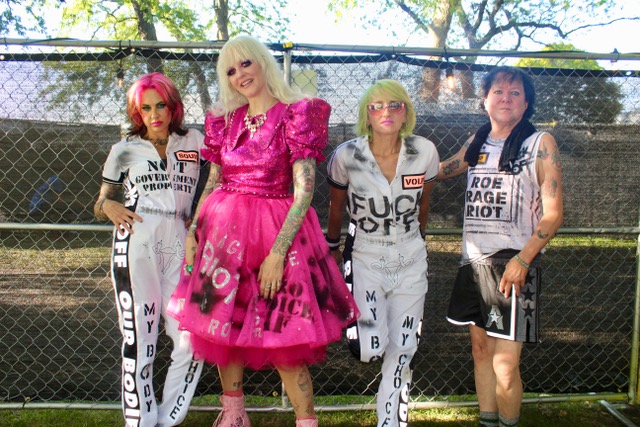 Perhaps one of the biggest up-and-coming singers at Riot Fest in 2022 is Englishman Dominic Richard Harrison known as Yungblud who spoke openly backstage before his set on Saturday.

“I live in a bubble sometimes. I know my fanbase is getting bigger because the venues are bigger, but I wake up to news like this and can't believe it. I remember doing three free shows on the sunset strip in LA with Amazon for fun on a live stream. All of the information was coming in real-time as my music did well in countries like Australia and England. It was truly exciting.

On working with Willow Smith “She is a legend and like a bunny rabbit. She is unfiltered and is like me about chasing ideas. That is really cool. His favorite song to play currently is “Tissues.” He was looking forward to playing it a Riot Fest to see how the crowd would react to it.

The pansexual and polyamorous performer responds to he/him pronouns and said, “I have beautiful conversations with my friends every day about pronouns. My makeup artist identifies as nonbinary and doesn't really mind what they are called, but prefers they/them because it is neutral. There are no preconceived ideas on how someone should behave or dress with that as a pronoun. I think that is really cool and makes sense to me. That gave me a lot to think about. We should all be proud of who we are in the moment. Everything in this world comes down to love and it is ignorant of anyone to say that is a cliche because it is what everyone feels whether they show it or not. Let's all love everyone as well as ourselves.”

He described being out as the true definition of rock and roll. When asked if Oldblud could be a namesake as he ages, he said, “Yungblud is a mindset and everything is changeable. I am never going to be one thing forever. That is the fun part about it. I never know what I am going to do next!” He did mention talking with Billy Corgan from The Smashing Pumpkins about collaborating in the future. “It has been so cool to meet proper rock stars who have made an indent in culture recently. My music sounds all over the place because I don't want my songs to sound the same. I don't want audiences to know where I am going!” 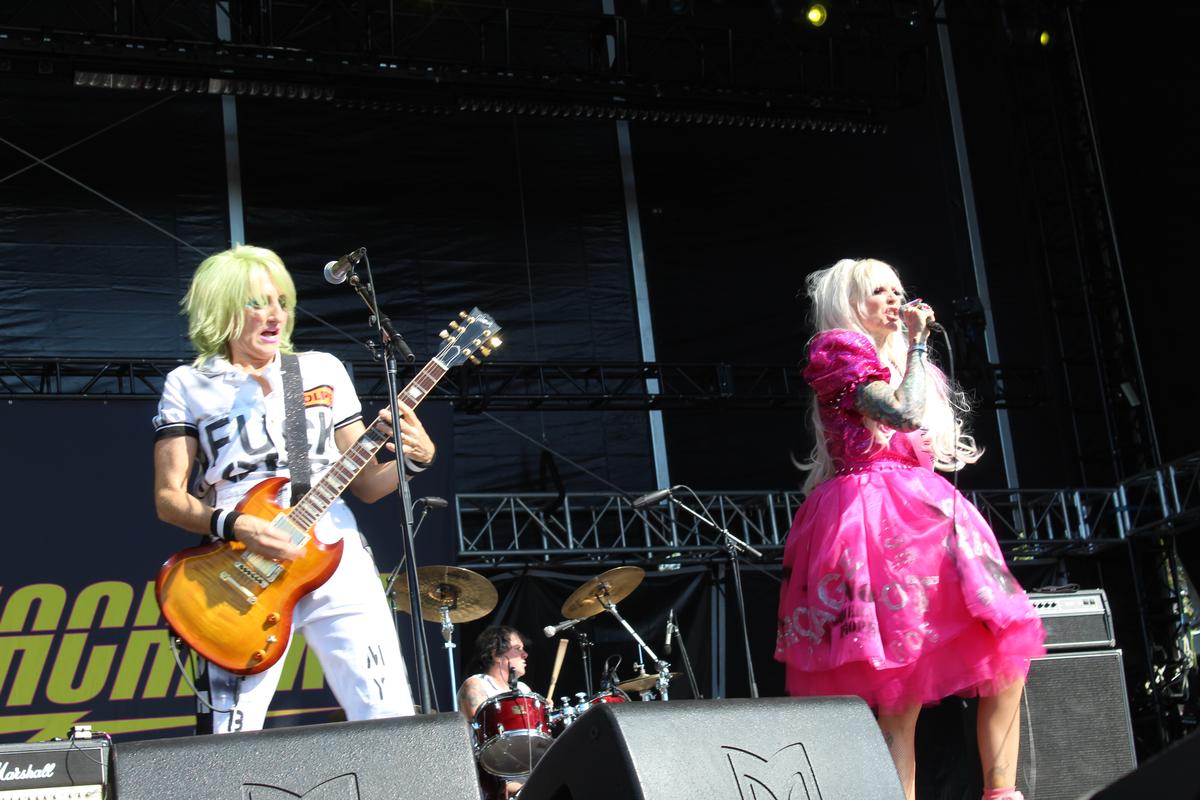 Theo Kogan, Gina Volpe, Sydney “Squid” Silver and Chip English of the band Lunachicks sat down to discuss their past and future projects at Riot Fest on Sunday.

The new book Fallopian Rhapsody the Story of the Lunachicks was made from Zoom calls, Google docs and reminiscing moments while in the same room together. Silver said, “Much of it was a collaboration. There were so many parts left out. It would have been three books there was so much information!”

This New York City band was originally formed with several members at the Fiorello H. LaGuardia High School of Music & Art and Performing Arts that many know from the Fame television show. Volpe said, “We went to separate schools before that then got to know each other in high school. We were picked up by a label right after that. The rest is history!”

Lunachicks had memorable moments over the course of their set including where Kogan threw her crown into the crowd then after a male fan caught it she exclaimed, “You should give it to a woman or a non-binary person next to you.”

Their appearance at Riot Fest might be included in the upcoming documentary called Pretty Ugly about the band as cameramen followed the quartet around the festival. Volpe explained, “We will see what they film after the doc is made. We are just the subjects.” English joked, “I think I was 18 years old when we started!”

“It was supposed to end with us coming back together in 2020 for the reunion shows, but then COVID happened. The filmmaker didn't know how to end the film and it is still going. I think it will be great!” Silver said.