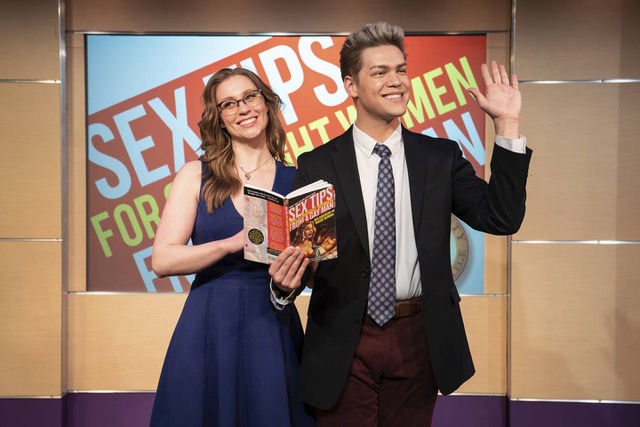 Sex Tips for Straight Women from a Gay Man is an interactive comedy show based on the 1997 book of the same name. The story takes place at a book event that turns into a sex seminar. The moderator named Robyn is played by Emma Jo Boyden and she starts off a bit awkward at the beginning, even though this is built into the basic character trait. This could be easier fixed by having her react to possible latecomers and being more playful with the crowd from the jump. She needs to represent as many typical straight girls as she possibly can and only accomplishes that sporadically throughout the storyline. Bradley Allen Meyer plays the eye candy Stefan who was hired for his good looks not acting ability and the material makes him even stiffer than he already is. Meyer can still make the same wooden choices in the role but needs a little more humanity added to the obvious sexual objectivity that Stefan requires similar to Rocky Horror in The Rocky Horror Picture. Leave it to a gay to save the day as Adam Fane enters the room by kicking up his heels as Dan. 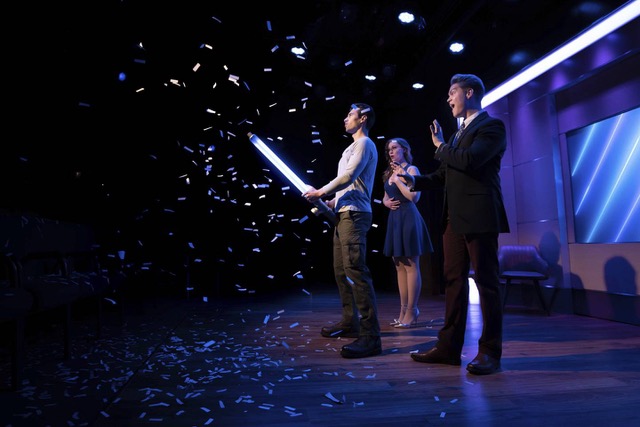 Fane crushes the stereotypes in what could have been an easily offensive depiction of gay people. He allows the audience to laugh at the generalizations and over-the-top mannerisms of this fun queer character. Through all of the crazy antics and advice Dan is eventually able to rise about the LGBTQ+ box that those around him place him in. He demonstrates that the straight and gay communities are not all that different after all when it comes to cumming. The methods and processes might be different but there is still a commonality that everyone can relate to. Sex shaming needs to end in 2022 and this is a live stage show that celebrates that possibility.

Chicago didn't have the draw of big-name celebrity talent such as Vegas did in the past, but Fane is a clear standout and we can look forward to seeing him in the upcoming musical Skates at the Studebaker Theater.

Here's a tip go see Sex Tips for Straight Women from a Gay Man with a group. The more the merrier and your friends' involvement will make the show even better. The cast feed off the energy of the people in the room and each night is completely different. For example, when Fane asks the spectators for a pet name for a penis, one person gave a Romanian nickname that got a priceless reaction from the actor. You had to be there, unfortunately, but this keeps the production fresh and spontaneous for everyone involved each night. The cast remains on their toes and Fane was especially talented at playing off the audience's sometimes vocal reactions.

The book Sex Tips for Straight Women from a Gay Man cashed in on the Will & Grace craze in the '90s and this stage show should try cultivating a nighttime cult following such as the popular Naked Boys Singing! did. If marketed the right way this bawdy romp could have a much longer run before it climaxes in Chicago.

Sex Tips for Straight Women from a Gay Man plays now through July 2 and tickets can be found at greenhousetheater.org. Here's another tip: leave the kiddies at home and plan a night on the town to go see it, you will be glad you did!