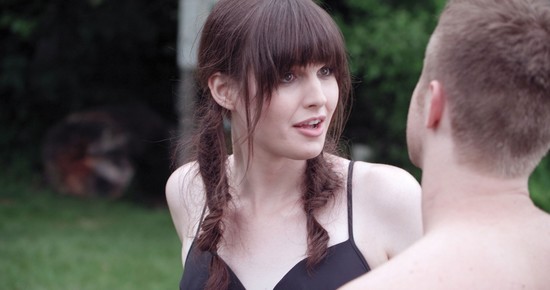 OPENING NIGHT! 5:30pm Pre-screening Reception 7:30pm Screening BOY MEETS GIRL Eric Schaeffer (US, 2014, 95 min) Trans actress Michelle Hendley shines in her debut with this winning, adorable romantic comedy. Hendley plays Ricky, a trans girl in small town Kentucky lamenting her uneventful love life to her best friend since childhood, Robby (Michael Welch), whose love life is shallow but plentiful. He playfully suggests she try dating a woman, and mere moments later Francesca (Alexandra Turshen) walks into her life, leaving her flustered and wondering if she should keep a more open mind. Complications arise, of course, when Francesca reveals that she is engaged, and that her family is not as welcoming of trans folks as she is. Ricky is reluctantly thrown into a dramatic love triangle when all she really wants is to get out of town and study fashion design in New York. Featuring tender, unassuming acting and an achingly honest portrayal of just how painful it is growing up trans, no matter how funny and confident one may seem on the surface, BOY MEETS GIRL may seem a simple love story, but it is told so well, and so tenderly, that it absolutely cannot be missed. After the screening of BOY MEETS GIRL, celebrate Reeling Opening Night with an after-party at Ginger Man Tavern, 3740 N. Clark St. Admission includes 2 drink tickets for Lagunitas beer. Admission for the after-party is $7 ($5 members). Tickets // FILM ONLY: Purchase tickets Tickets // FILM AND RECEPTION: Purchase tickets Tickets // AFTER-PARTY: Purchase tickets Q&A w/ Eric Schaeffer (director/writer) & Michelle Hendley (actress) to follow screening Sponsored by Lagunitas