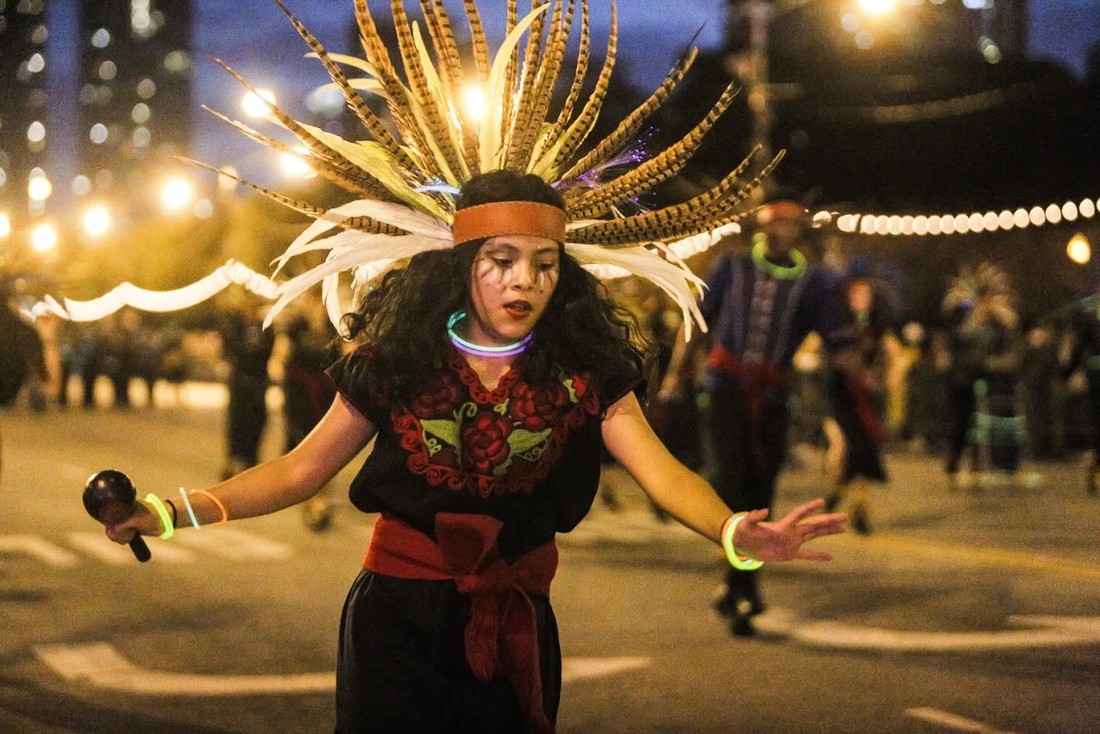 arts in the dark halloween parade

"The move to historic State Street represents the launch of an exciting new phase in the life of the parade, and will make this dynamic event even more accessible to both locals and visitors to the city," says Sharene Shariatzadeh, President and CEO of LUMA8, the producer of the parade. "The architectural walls that line either side of State Street will give the performances a more intimate feel, and also will allow us to play with lighting up some building facades – an area we hope to expand upon in the future."

The parade declares "Halloween as the artist's holiday," Shariatzadeh told ChicagoPride.com. "Chicago has this incredible cultural community, and there are all of these verticals, like dance and theater, that often have one day of the year that they celebrate together. There wasn't any one moment when every type of organization, from the most esteemed, to aspiring organizations, and even individual artists, really came together to celebrate Chicago's cultural community."

LUMA8 (which stands for "Light Up My Arts") is a not-for-profit dedicated to creating conversations about Chicago that are heard around the world. In addition to the Arts in the Dark Halloween Parade, LUNA8 has worked to highlight cultural organizations from the Shedd Aquarium ("Under the Sea"), to the Museum of Science and Industry ("Starry Nights and Flying Creatures), and the Merchandise Mart (the recent "Art on the Mart" lighting production).

The vibrant parade showcases and highlights the city's culture and diversity.

"We make a very personal and deliberate effort to engage as many different types of groups as we can - and we're almost there with every ward in Chicago represented," says Shariatzadeh. "One of the things we did this year was Arts in the Dark on the River Walk this summer, which was a series of three lantern processions. One of the groups who's participated in the parade, the Chicago Gay Men's Chorus, also participated in that event."

The Commissioner of the Chicago Department of Cultural Affairs and Special Events, Mark Kelly, is the original founding artistic director of the parade.

"His feeling was and is that everyone is an artist on Halloween," Shariatzadeh added.

"We want to make it a spectacle parade, and for so many groups, even if they're in other parades, we're really asking them to display their arts, and to do something different," Shariatzadeh told ChicagoPride.com. "We don't want it to be commercial or political."

Shariatzadeh talks about one of the most memorable moments and rewarding experience while working on the parade.

"We had a meeting of parade contingents where every group has one representative to get the gist of all of the logistics, and be walked through the drop-off and pick-up, and what they can expect. Commissioner Kelly knew we were going to have this very boring meeting and he decided that he wanted to send one person up for every group to read a haiku about their presentation."

"My response was, "they're spending resources, in terms of manpower and money. We can't ask them to do more work. We're begging everyone to do so much already, and now they have to write a haiku." I was against it, but I thought, "Fine. We'll do it, and no one's going to be into it." About 80% of the people wrote the haikus while they were sitting there. But Mark said, "we want everyone to know who's there, and who's in it, and to know what they're doing; but if we have people come up to the microphone and just start talking, some people will talk for 20 minutes; so we needed it to move fast, but we want everyone to know."

"It was brilliant," Shariatzadeh continued recalling the experience. "Because everyone did it, even if they wrote it while they were in line. Some of them were hilarious, some of them were so touching, funny, every one was just very interesting with different haikus. People talked about what they were doing and what it meant to them to be in it, or whatever it was. It made it an amazing event, so now we do that every year. It's just incredible to see how engaged the people who have now been in it for one or more years, and how it's become its own little community!"

On Saturday October 20, The parade will glide down State from Lake to Van Buren Streets. Neighborhood arts groups from throughout Chicago will also be presented by many civic and corporate partners.

Presented in collaboration with the Chicago Department of Cultural Affairs and Special Events, The Chicago Park District and the Chicago Loop Alliance, the parade will feature well over 90 contingents from notable organizations like Lookingglass Theatre Company and Second City.

The parade also offers an opportunity for established organizations like the Harris Theater and the Chicago Blackhawks to sponsor less-resourced cultural organizations and neighborhood groups who would not be able to participate without their support.

The family-friendly event begins at dusk. The parade will be immediately followed by a live DJ dance party at Cloud Gate ("the Bean"), and Maggie Daley Park will show the movie "Beetlejuice", and a variety of activities for families.

More information can be found on the Arts in the Dark website at https://gopride.com/Zee0