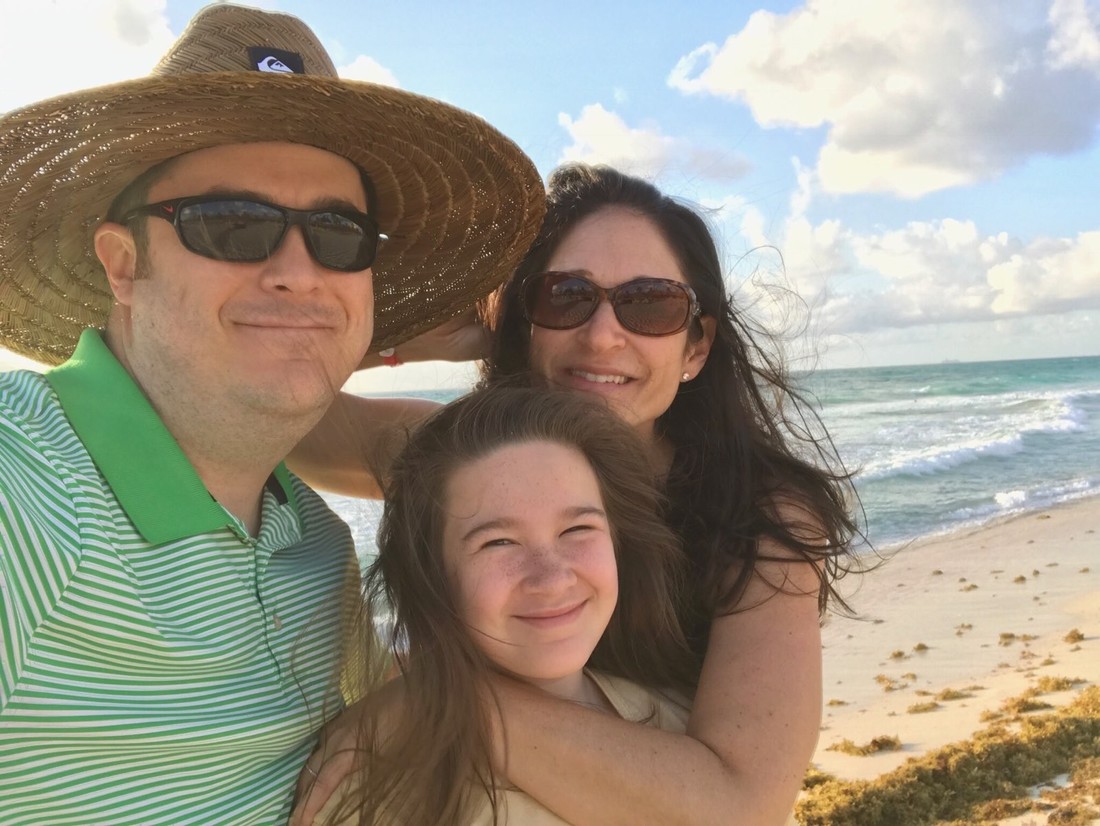 molly pinta, center, with her parents carolyn and bob

Buffalo Grove, IL - Plans have begun for the inaugural Buffalo Grove Pride Parade next June – thanks to a dedicated, motivated, openly-lesbian 12 year-old.

Molly Pinta, who will be a 7th-grader in the fall at Twin Groves Middle School in Buffalo Grove, attended her first-ever Pride Parade last month in Aurora, which was the first Pride Parade in that city.

She marched, carrying a sign stating that she had started the first Gay-Straight Alliance at her school this past year. "I was filled with joy when I got cheers from the crowd and was inspired to be even more brave about who I am," Pinta said. "Aurora's parade was classy, family-friendly and just lovely in every way. We were so impressed with their efforts."

And certainly driven, too – to hold the first-ever Pride Parade in the northwest suburbs.

The first-ever Buffalo Grove Pride Parade is slated for June 2, 2019.

The Aurora parade drew a crowd of about 5,000. Buffalo Grove and its surrounding areas "are far more progressive, (so) we anticipate thousands," will attend Buffalo Grove Pride Parade, said Pinta who, anchored by her supportive parents, Carolyn and Bob, both 40, has been planning for the 2019 event for the past month or so.

They have met with Buffalo Grove city officials, police, park district members and others.

"Buffalo Grove has been nothing but supportive and even very excited to be involved in bringing Pride to our town," Pinta said. "My mom met with the police about the route and they were very warm, friendly and helpful. Our village president has been giving her support."

The Buffalo Grove Pride Parade will be a late-morning event, possibly followed by a Pride festival. Details are being worked out.

The route will cross a main road and then go through a large neighborhood, Pinta said. "It will end in a huge park district area with plenty of room for a rally and festival."

Pinta, who eventually will attend to Stevenson High School in Lincolnshire, said the parade likely will cover a one-mile course.

"Details for the (post-parade) party are being worked out at this point, but we will have performances from the theater group that Molly is involved in, speakers and music," said Carolyn Pinta. "It would be amazing to get a special performer who is part of the LGBTQ community, (too). There will be food, drinks and various Pride vendors. We are very excited to be planning a part of the event that will honor people in the LGBTQ community who have been lost to violence. We wanted this to be a rainbow balloon release, but are considering lots of different options to protect the environment."

The Pinta family has started a Facebook page to gather ideas and supporters. They have businesses ready to sponsor the event and people coming out from all over to tell the stories of their family members, Pinta said. "Just the idea of this parade is a success; knowing that my family has almost raised the first $10,000 to support it in such a short amount of time shows how much it is wanted and how many people will work together to make it great."

Their GoFundMe page is: www.gofundme.com/buffalo-grove-family-pride-2019.

"We want to throw a beautiful, family-friendly event that is colorful and lively," said Pinta, who came out in early spring. "Just as important, we are throwing events all year long leading up to the (parade) to bring education to the community about LGBTQ folks. The first event will be on National Coming Out Day, (which is on) October 11. We are hosting a fundraiser and movie (screening) of 'Love, Simon.' We (also) want to hold a panel in the spring and a cabaret night with musical acts. We want to celebrate and normalize being gay. Straight people don't have to come out, why should we?"

Pinta said they want the Buffalo Grove Pride Parade to be an annual event, held every June.

Indivisible Aurora, the group that hosted Aurora's parade, will be presenting Pinta with a $500 check for the Buffalo Grove event.

Pinta said coming-out was not too nerve-racking "because I knew how accepting my parents were and that nothing bad would come from it," she said. "It makes me so sad to hear stories about kids who are kicked out (of their homes) only because they like a (certain) gender or feel that they do not identify with the gender they were assigned at birth."

Carolyn is a Spanish teacher at Twin Groves Middle School; Bob is a math teacher at Stevenson High School. Bob's brother is gay and one of Carolyn's best friends is gay.

"We have witnessed Molly's sexual preferences first-hand and support her in every way," Carolyn said. "She is unique and special and we would not want it any other way. We feel blessed to have a child who is comfortable enough with herself to share with the world and to inspire others to be who they are."

Pinta said most were not surprised when she came out "because I had always been a different kid who was just proud of who she was."

Pinta said they ultimately would like to raise $30,000 to offset the parade's overall cost.

"The parade and (post-parade) activities will be one day (in 2019), but who knows what may happen in the future. Aurora is expanding theirs next year since it was such a great success," Pinta said.

Many schools in the area will be involved, Pinta said. Every area GSA will be invited to march and/or have a float.

"The parade will feature any and all LGBTQ residents and families, GSAs, LGBTQ organizations, religious groups, supportive politicians, musical groups and as many LGBTQ-friendly companies as possible," Pinta said.