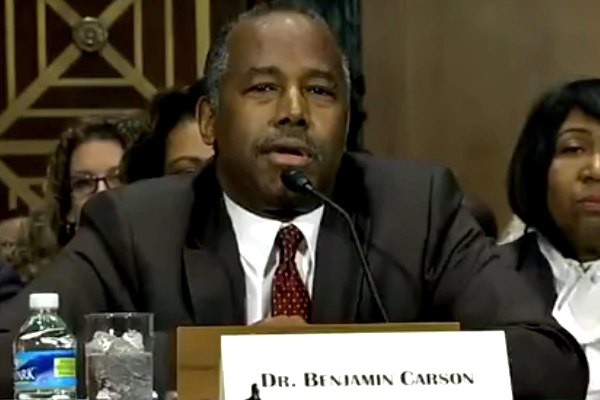 At his Senate confirmation hearing on Thursday, Ben Carson said that he's opposed to "extra rights" for LGBT people.

Carson is President-elect Donald Trump's nominee for secretary of Housing and Urban Development.

Democratic Senator Sherrod Brown questioned Carson about statements he had made against LGBT rights.

"You have in the past raised questions about whether LGBTQ people should enjoy the same rights as everyone else. Do you believe that HUD has a duty to take actions that promote equal access to housing opportunities for LGBTQ people?" Brown asked.

"Of course I would enforce all the laws of the land," Carson replied. "And I believe that all Americans, regardless of any of the things you mentioned, should be protected by the law. What I have mentioned in the past is that no one gets extra rights. Extra rights means you get to redefine everything for everybody else."

Carson, a retired pediatric neurosurgeon and failed presidential candidate, has used similar language in the past in discussing his opposition to LGBT rights.

"Of course, gay people should have the same rights as everyone else. But they don't get extra rights, they don't get to redefine marriage," Carson told a crowd at CPAC in 2014.

In an interview with Fusion, Carson defended his idea of creating separate bathrooms for transgender people by suggesting that they were asking for extra rights.

"How about we have a transgender bathroom?" Carson rhetorically asked. "It is not fair for them to make everybody else uncomfortable. It's one of the things that I don't particularly like about the [LGBT] movement. I think everybody has equal rights, but I'm not sure that anybody should have extra rights."