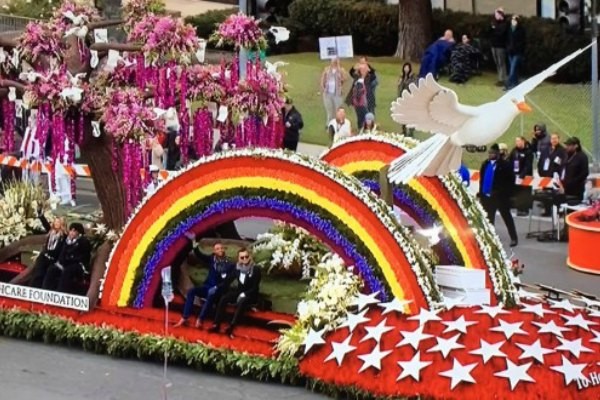 A float at the 128th Rose Parade honored the victims of the Pulse massacre.

Forty-nine people died and dozens were wounded when a lone gunman opened fire on June 12 in Pulse, a gay nightclub in Orlando.

Several survivors of the massacre and the club's owner, Barbara Poma, waved to the cheering crowd from a float commissioned by the AIDS Healthcare Foundation and Impulse Group United during Monday's annual New Years Day parade in Pasadena, California, The Advocate reported.

The float, which featured a dove soaring above two rainbows, was titled "To Honor and Remember Orlando." Forty-nine live doves were released twice throughout the parade to honor the memory of those lost in the massacre.

Impulse Group Orlando President Corey Lyons, who also rode on the float, said: "We must not lose sight of the fact that this beautiful float also serves as a solemn and sacred reminder to millions of parade viewers around the world that the stigma and discrimination that led to this attack are not over – the fight goes on, and we must be vigilant in speaking out and speaking out against such bigotry, hatred and injustice."

The float won the Lathrop K. Leishman prize for "most beautiful noncommercial float."