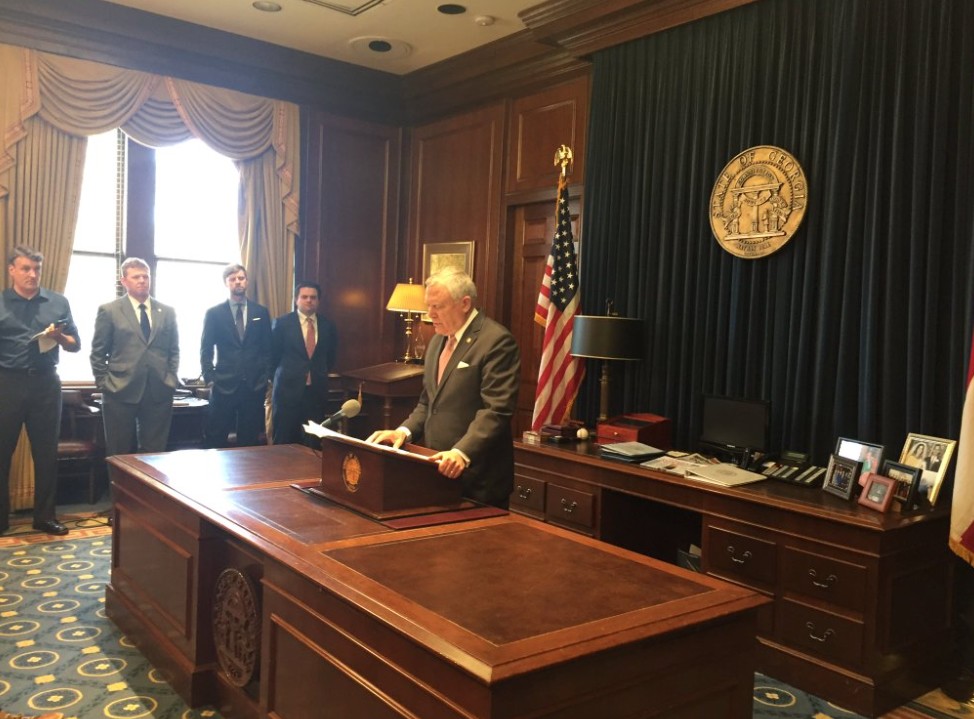 photo credit // twitter/lorigearywsb
Atlanta, GA - Under increasing pressure from major corporations that do business in Georgia, Gov. Nathan Deal announced plans to veto House Bill 757, known by its critics as the "anti-LGBT" bill.

"I believe it is a matter of character for our state," Deal said in announcing his veto. "Our people every day work side by side without regard to the color of the skin of their fellow mate, or the religion their co-worker might adhere to. They are simply trying to make life better for themselves and their communities. That is the character of Georgia. I am going to do my part to keep it that way. For that reason, I will veto House Bill 757."

The discriminatory bill that would have allowed private businesses, individuals and medical and social services agencies to discriminate against anyone in Georgia on religious grounds.

"Today we feel very fortunate that LGBT people and people with living with HIV were spared the terrible consequences of HB 757," said Lambda Legal Southern Regional Director Simone Bell. "We applaud today's veto by Governor Deal and thank him for his willingness to listen to the voices explaining the damage this bill could have caused."

Last week, Human Rights Campaign, the largest LGBT civil rights advocacy group in the nation, submitted a letter to Deal with a long list of Hollywood actors, directors and movie studios that said they won't work in the state unless the bill is vetoed.

"Today, Governor Deal heard the voices of Georgians, civil rights organizations, as well as the many leaders in the entertainment industry and private sector who condemned this attack on the fundamental rights of LGBT people, and he has set an example for other elected officials to follow," said HRC President Chad Griffin. "Discrimination and intolerance have no place in the United States of America, and we hope North Carolina Governor Pat McCrory and the North Carolina General Assembly are paying close attention to what has transpired in Georgia. They must undo their disgraceful attack on LGBT people in the state's upcoming legislative session."