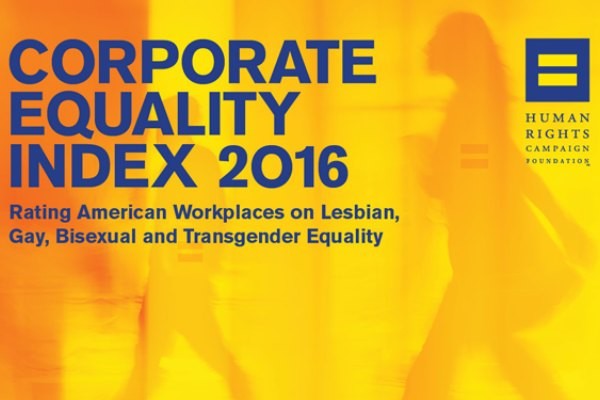 The number of companies earning top marks for how they treat their lesbian, gay, bisexual and transgender employees has hit a record high, according to a new report released Tuesday by the Human Rights Campaign (HRC), the nation's largest LGBT rights advocate.

The Human Rights Campaign's (HRC) 14th annual Corporate Equality Index (CEI) ranks 407 major companies with a perfect score of 100, the most in the history of HRC's CEI program.

The record was hit despite a new requirement that top-scoring companies have a global non-discrimination policy that specifically prohibits discrimination on the basis of sexual orientation and gender identity.

"This year represents a milestone in the history of the CEI, and corporate America continues to break new ground in the fight for LGBT equality," HRC President Chad Griffin said in a statement. "Our nation's top companies this year have risen in record-breaking numbers to the challenge of extending non-discrimination protections to their LGBT employees around the globe. These companies and law firms have consistently shown leadership in building support for greater equality for LGBT employees, and not just within the walls of their own workplace. This year's CEI demonstrates that business understands what many have long known: The fight for LGBT equality does not end at our borders, but is a global endeavor that must be pursued with greater urgency than ever before."

Twitter, Uber and Airbnb were among the newcomers to earn a perfect score. Apple and Xerox are among the companies that have scored high marks since the survey's introduction in 2002.

The CEI first included trans-inclusive health care as a requisite for companies to receive a perfect score in 2012. Perfect scores at first tumbled from 337 to 189 but have since rebounded. This year's survey identifies 511 companies that offer at least one trans-inclusive health care option. In 2002, no Fortune 500 company offered such a benefit.