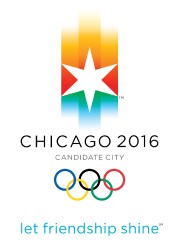 The visit by the IOC's 16-member Evaluation Commission will include detailed briefings by officials of Chicago 2016 and site visits to proposed venues, including the property just south of downtown where the bid committee has proposed the Olympic Village location. The delegation will also have an opportunity to take in some of Chicago's arts, culture and hospitality during their six-night stay.

"We are honored to welcome the Evaluation Commission to our city and we are excited to share our vision for what we believe would be a spectacular Games experience for the athletes, spectators, residents and the entire Olympic family," said Patrick G. Ryan, chairman and CEO of Chicago 2016. "We look forward to a very productive visit."

The formal briefings will focus on a number of topics, from Chicago 2016's Games plan to its plans for transportation and security. The majority of venue sites are in Chicago's signature parks located along the Lake Michigan shore. Chicago's plan puts the athlete at the center of the Games, and the Games in a scenic and compact setting in the heart of the city. The plan surrounds the sport competition venues with a festival of friendship. Chicago 2016's recently adopted tagline is reflective of its proposal, "Let Friendship Shine."

The Evaluation Commission is made up of seven IOC members, six subject-matter experts and three IOC administration staff. Chicago is the first Candidate City the delegation will visit, and in September they will provide the entire IOC with a report from each city.

Chicago 2016 delivered its nearly 600-page Candidature File, or bid book, to IOC headquarters in Lausanne, Switzerland February 12. The IOC will make its Host City selection for the 2016 Games on October 2, 2009 in Copenhagen, Denmark.