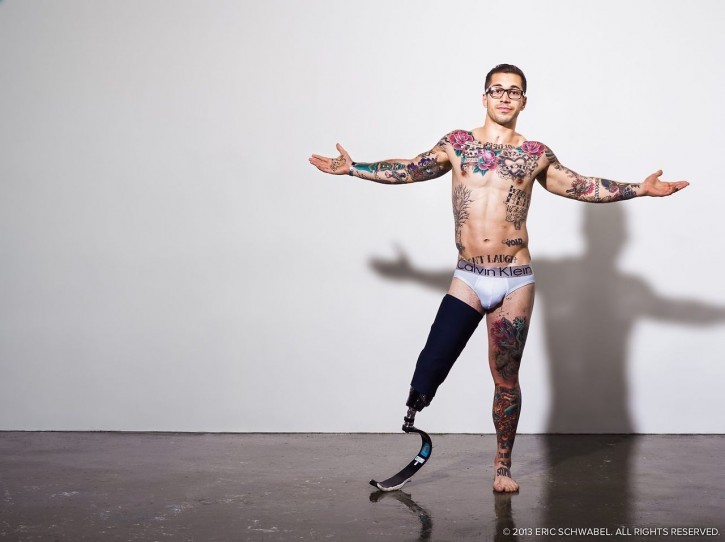 Market Days heats up with the fifth installment of Matthew Harvat's (Circuit Mom) dance party, Revolution, which happens every August to coincide with the two-day street festival in Boystown. As part of the "Superhero" theme, Harvat invited real life superhero Alex Minsky to host the annual event.

Minsky is a veteran and model you've no doubt seen featured in magazine spreads or on the Internet. During his first tour in Afghanistan in 2009 Minky's Humvee ran over a roadside bomb -- his bottom jaw was broken in four places, his arm was torn to shreds and his right leg was blown off just below the knee. After his mother was told her son wouldn't live, Minsky pulled through and following a dark period of depression and alcoholism, he started hitting the gym to keep busy and stay sober -- it was here Minsky was discovered. Now, he changes perspectives and assumptions everywhere about veterans, people with disabilities and survival.

The 25-year-old former Marine is fully aware of his gay fanbase and recently told GQ Magazine why he loves gay men.

"I love gay men," says Minsky, "because if they like something, they'll let everybody know."

Minsky makes his first trip to Chicago over Market Days weekend. Meet him Saturday, Aug. 8 as part of Revolution "Rise Of The Villains-The Dark Side of Superhero" at the House of Blues Chicago, 329 N. Dearborn.

Related: Everything you need to know for Market Days 2015