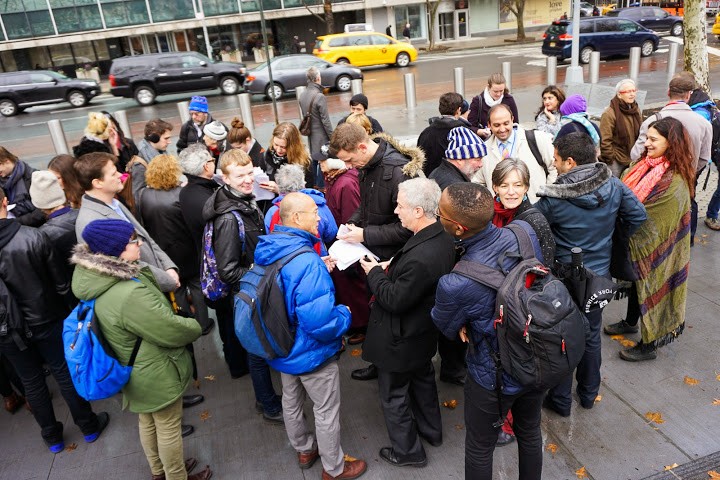 Join the IGLHRC for a pre-Market Days cocktail party with a view on Thurs., Aug 6

Chicago, IL - Kick off your Market Days weekend with a rooftop cocktail party thrown by the International Gay & Lesbian Human Rights Commission next Thursday, August 6 with a view of Boystown as it prepares for the coming festivities.

A leading human rights organization with special status at the UN, the IGLHRC works to combat the abuse and discrimination faced by LGBT folks across the world, primarily by building advocacy partnerships with LGBT rights groups, working to change laws and disseminate information.

"Over 25 years, we have helped to partner with LGBT groups all over the world to change laws, perceptions and build the base of support in countries where it's simply not OK to be gay," Ashton Giese, a Development Associate with the IGLHRC and co-chair for next Thursday's event, told ChicagoPride.com. "Every day, LGBTI people's human rights and dignity are abused around the world in ways that shock the conscience. The stories of their struggles and their resilience often in the face of great danger are astounding, yet remain unknown -- or willfully ignored -- by those with the power to make change."

For the last two and a half decades the IGLHRC has worked with the United Nations, where they have a special status to submit reports and provide briefings on the status of LGBTI groups across the globe, as well as regional human rights monitoring bodies and civil society partners to advocate for the millions of LGBT folk around the world facing discrimination and worse.

They work to strengthen the voices of these disenfranchised individuals, bringing their concerns to the global stage and helping the movement make changes that last.

"While the fight for LGBT equality is not done here at home, the situation for LGBT people abroad is dire," Giese said. "From full-on execution to legalized hatred, familial rejection to physical abuse, LGBT people abroad face widespread discrimination and sometimes even death only for being themselves."

"Without a groundswell of pressure, particularly from countries where LGBTI equality has progressed, these attacks on individuals' fundamental identity will continue unabated," he continued. "Since 1990, IGLHRC has been on the front lines working to build this groundswell, fighting to protect and advance LGBTI peoples' dignity and human rights as part of the global human rights movement. We empower activists across the world, hold leaders accountable for abuses we document and measure our impact through positive change in people's lives."

Recently the group raised over $10,000 to help an LGBT group in Nepal recover from the recent earthquake, while also directly supporting a group in the very homophobic Jamaica and helping to publish an LGBT magazine in Uganda. The IGLHRC also works to develop and publish public

reports, such as one released in mid-July titled "Lesbian, Gay, Bisexual and Transgender Rights in Iran: Analysis from Religious, Social, Legal and Cultural Perspectives."

Founded in San Francisco and based in New York, the IGLHRC holds events in LA, Seattle and Washington DC, but this will be one of their first events in the Chicago area, where they hope to continue to build their base of support here in the U.S.

"We have around 250 supporters in the Chicago area -- but I know there is a lot of interest in international affairs here and international LGBT rights so this is a way to connect with new supporters and help give them opportunities to be involved in our work," Giese said.

The rooftop cocktail party is being hosted at the Boystown home of Russ Alexander, 821 W Roscoe St. Originally from Australia, Alexander is a supporter of LGBT causes who works for a educational study abroad program that sends students all over the world. Attendees will enjoy unlimited cocktails from sponsor Stoli Vodka on Alexander's fabulous roof overlooking Boystown and have the opportunity to meet Giese, representing the IGLHRC, and learn more about the organization and its work.

"I've always been involved in LGBT advocacy," Giese told ChicagoPride.com. "Most recently I've built an LGBT travel business and felt the best way I could give back was to get involved in ensuring that the LGBT people I meet abroad could have better lives. Last year, I created the GAYography brief -- a news source as well as exciting weekly email for LGBT travelers who also want to be LGBT advocates."

"It'll be my first time at Market Days -- and I'm excited to finally write the blog I've been wanting to about how I feel Chicago is the best gay neighborhood in the world!" he continued. "Last year, Chicago was listed as the best neighborhood to be gay in -- and I completely agree. From my experiences along Halsted Street... to all of the best things that the City provides... Chicago holds a special place in my heart."

Tickets are available online for $35, $18 for students. Giese invites anyone who considers themselves a strong supporter of LGBT rights abroad to sign up to be on the host committee: if you bring five others, you'll have your own Stoli bottle at the event.