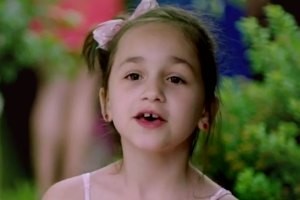 "When I kiss the bride it's gonna both be exciting and disgusting," a young boy says in the 3-minute ad.

"My wedding is going to be so awesome, because I'm going to have a volcano with lava pouring everywhere and then we're going to use the lava rocks to have a rock fight," another boy says.

One of the brides says that as a child she was unable to dream about her big day.

"When I was younger, having a wedding wasn't really a part of my future because I knew that I was different and I didn't see anyone around me that was like me. Who, you know, we're two women living together as a married couple. I just couldn't picture it," she says.

"Everybody's dreams should be allowed to come true," a girl says, "because everybody should be happy."

In a press release, Esurance said that it extends the married rate to gay couples even in states that do not allow same-sex marriage.

"Esurance was one of the first car insurance companies to extend the married rate to LGBT customers," the company said. "Something it started doing in 2011."