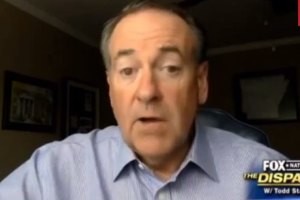 Republican presidential candidate Mike Huckabee has reiterated his call for civil disobedience if the Supreme Court strikes down state bans on gay marriage.

The nation's highest court heard arguments in a case challenging bans in Ohio, Tennessee, Michigan and Kentucky on April 28. A ruling, which could lead to nationwide marriage equality, is expected before the end of the month.

"What if no one had acted in disobedience to the Dred Scott decision of 1857? What if the entire country had capitulated to judicial tyranny and we just said that because the Supreme Court in 1857 said that a black person wasn't fully human? Suppose we had accepted that. Suppose Abraham Lincoln, our president, had accepted that. Would that have been the right course of action?"