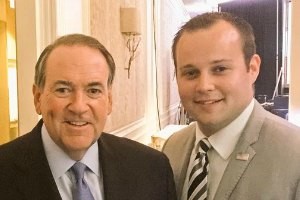 According to Talking Points Memo, the endorsements were removed sometime Monday.

On Wednesday, the Duggars, whose Arkansas family is featured in TLC's 19 Kids And Counting, appeared on Fox News, where they told Megyn Kelly that their oldest son, Josh, was investigated in 2006 when he was 14 for molesting five underage girls, four of whom were his sisters and one a babysitter.

Huckabee had defended Josh Duggar, saying in a Facebook post that good people "do regrettable and even disgusting things." He also scolded "blood-thirsty media" for its role in reporting the details.

Last year, Duggar and his mother led a successful campaign to defeat an LGBT protections measure in Fayetteville, Arkansas. Both claimed that such measures jeopardize the safety of children.

"I think that protecting young girls and not allowing young men, and men in general, to go into a girls' locker room is just common sense," she said.

(Related: Mike Huckabee: Voters not focused on my transgender comments.)