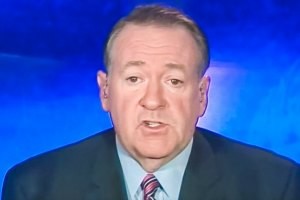 During an appearance on Fox News Sunday, Republican presidential candidate Mike Huckabee argued that a president could ignore a Supreme Court ruling, claiming that the court cannot make laws.

In recent months, and again in announcing his presidential bid, Huckabee warned that the Supreme Court cannot "overrule God" when it comes to "the sanctity of marriage."

The high court is expected to rule next month on a case challenging state bans on gay marriage in Ohio, Tennessee, Michigan and Kentucky. A ruling striking down the bans as unconstitutional would bring nationwide marriage equality.

"Presidents have understood that the Supreme Court cannot make laws," Huckabee said. "They cannot make it. The legislature has to make it.The executive branch has to sign it and enforce it. And the notion that the Supreme Court comes up with the ruling and that automatically subjects the two other branches to following it defies everything there is about the three equal branches of government."

"[Is it] up in the air as to whether you're going to obey the Supreme Court?" host Chris Wallace asked."Let's say that the president decided, 'I don't like the Supreme Court's ruling on that.' Let's say Nixon had said, for instance in Watergate, 'I don't want to turn over the tapes and the court can't make them.'"

"The president still has to follow whatever the law is. Does Congress have a law that tells him what he's going to do? In that case, Congress was ready to impeach Nixon and he ultimately resigned," Huckabee responded.

"What if the Supreme Court ruled that they were going to make the decision as to who was going to be the next president and save the taxpayers and the voters from all the expense and trouble of voting, and they'll just pick a president.Well, we would say, 'Well, they can't do that.' Why can't they do it? They can't do it because it's not in the law. We are sworn to uphold the Constitution and the law. And it has to be consistent and agreed upon with three branches of government, one can't overrule the other two," Huckabee added.