Activists urge IL Senate to vote 'no' on Meeks appointment 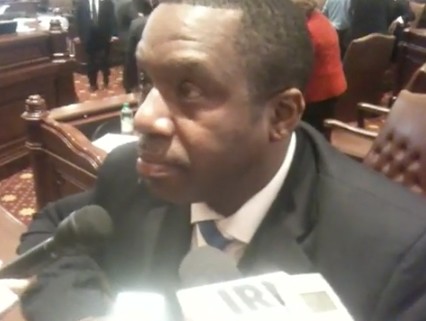 Chicago, IL - The Gay Liberation Network (GLN) is urging Illinoisans to contact their state senators in advance of a planned hearing on the appointment of former state Sen. Rev. James Meeks as the Illinois State Board of Education Chair.

Meeks' appointment is among those on the agenda of the Executive Appointment Committee hearing this morning, March 19, in Springfield.

GLN has posted an online petition urging state senate members not to confirm Meeks, whose nomination was announced by Gov. Bruce Rauner in January. As of March 19, that petition has over 1,600 signatures. But GLN officials are emphasizing the need for residents to contact their senators, preferably by phone, to urge them not to pass the vote.

Andy Thayer of GLN said, "If the Democrats are serious about LGBT-equality and supporting unions, they won't pass this nomination. They have the majority, so the Republicans can't pass this nomination without their help. It should be added that Meeks has zero qualifications on education. He's no more qualified to be in that job than I am."

The appointment of Meeks, who is a vocal supporter of charter schools and voucher programs, has drawn objections from numerous constituencies within the LGBT community, thanks to his opposition to marriage equality and anti-LGBT discrimination protections, and many public statements denouncing gays. Advocates fear that the appointment will set back issues such as anti-bullying protections and sex-education programs.

According to the Illinois Constitution, the governor's appointments must be voted upon within 60 session days of their being delivered to the Senate, or the appointment will be automatically instated. Rauner officially delivered the nominations on January 28.