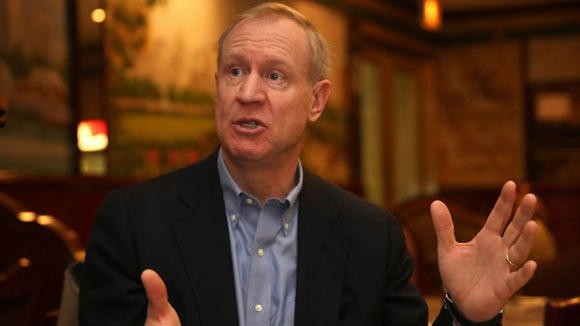 Chicago, IL - As Bruce Rauner takes the helm of the state Monday afternoon, Equality Illinois extends its hand in cooperation but promises to remain an ever-vigilant voice and force representing the state's lesbian, gay, bisexual and transgender citizens.

"Illinois is facing many challenges and it's going to take both parties and people of all ideas working together to resolve them. LGBT Illinoisans and Equality Illinois are ready to do our share, including working directly with the Rauner Administration, to make Illinois better," said Bernard Cherkasov, CEO of Equality Illinois.

Sadly, one of his first major appointments, the nomination of James Meeks, a virulently outspoken anti-LGBT former member of the Illinois Senate, to guide the state's education system does not measure up to Rauner's election commitment of holding "no social agenda" and is an insult.

Illinois is a diverse state facing complex and challenging issues, and as they are addressed by the new governor, Equality Illinois, the state's largest civil rights advocate for LGBT Illinoisans, stands committed to not only preventing backsliding on the significant accomplishments for LGBT Illinoisans achieved under Democratic and Republican administrations but continuing the struggle for full equality.

"Even as we've made progress elsewhere, we are fighting against pervasive bullying and youth suicide and for greater understanding of the needs of transgender teens, and to have Meeks at the helm of the institution that is guiding the education of our children is an insult," said Cherkasov.

"An individual's supposed expertise in one area does not excuse major failings in another. Meeks actively worked against the freedom to marry and has called homosexuality 'an evil sickness.' He was cited as one of the leading religious voices in the anti-gay movement by the Southern Poverty Law Center," Chekasov said.

"The Meeks appointment presents the Illinois Senate, which approves or rejects gubernatorial appointments, and the House with the obligation to ensure that his anti-LGBT social views do not creep into Illinois education policy and that Illinois remains on the path to full equality," Cherkasov said.

Rauner's appointment of business executive Leslie Munger to replace the late Judy Baar Topinka as comptroller is more typical of the officials Equality Illinois expects Rauner to choose. "Leslie Munger has already demonstrated her willingness to support and work with LGBT Illinoisans, and that is a standard we expect Rauner to follow," Cherkasov said.

"We hold the door open for working together with the new Rauner administration but we will not hold back in defending our victories, asserting our intention to continue the fight for full recognition and protection of LGBT Illinoisans and to speak up and act boldly when our expectations are not met."