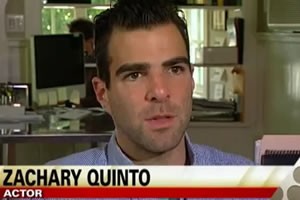 Actor Zachary Quinto says his comments about HIV/AIDS and the treatment commonly known by the brand name Truvada, have been misconstrued.

Quinto is one of the four out celebrities featured on the covers of gay glossy Out's Out100 double issue.

In his cover story, the 37-year-old Quinto, who is best known for playing a young Spock in 2009 Star Trek reboot and last year's sequel, Star Trek Into Darkness, lamented the "tremendous sense of complacency in the LGBT community" over AIDS.

In a Huffington Post op-ed, Quinto responded to the backlash, saying his comments were "never meant to be incendiary or judgmental."

"I am a staunch advocate for the rights and well-being of the LGBT community. I have deep compassion and empathy for people living with HIV/AIDS. I am assuredly not internally homophobic or poz-phobic or willfully ignorant regarding this issue. I am a well-adjusted and well-educated gay man," Quinto wrote.

"What troubles me – and what I was trying to speak to in my interview – is an attitude among (some of) the younger generation of gay men – that we can let our guard down against this still very real threat to our collective well-being. I have had numerous conversations in my travels with young gay people who see the threat of HIV as diminished to the point of near irrelevance. I have heard too many stories of young people taking PrEP as an insurance policy against their tendency toward unprotected non-monogamous sex. THAT is my only outrage."

"I was simply trying to assert my belief that we need to be especially vigilant and accountable to ourselves and one another at this moment in our evolution."

Quinto added that he was "thrilled" that his comments "have generated a spirited dialogue about HIV/AIDS."