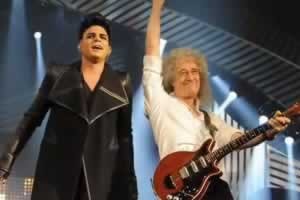 Queen has been named Band of the Year at the 10th annual Classic Rock Roll of Honour Awards held Tuesday in Hollywood.

"We won!! So excited to win band of the year w @QueenWillRock at the #ClassicRockAwards!!" Lambert tweeted to his millions of followers.

Other winners included Ozzy Osbourne, who won the Classic Album category for Blizzard of Ozz, and Gregg Allman of the The Allman Brothers Band, who took home the Living Legend award. Past recipients include Iggy Pop, Alice Cooper and Jimmy Page.

Lambert will join Queen band members Brian May and Roger Taylor for a series of European dates after touring North America and Australia earlier this year. The Queen + Adam Lambert European tour kicks off January 13 in the United Kingdom and includes stops in Paris, Berlin and Milan.