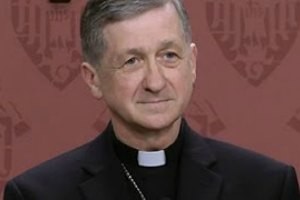 Pope Francis' first major appointment in the United States is a moderate on social issues, including gay marriage and abortion.

Chicago, IL - Pope Francis appointed Bishop Blase Cupich of Spokane, Wash., to be the next archbishop of Chicago. Cupich, a moderate on social issues such as same-sex marriage, will replace Cardinal Francis George, a conservative and vocal opponent of marriage equality in Illinois.

When Cupich, 61, takes over the post in the third-largest diocese on Nov. 18, he'll succeed George, 77, who has been battling kidney cancer.

Unlike George, Cupich is considered a moderate with a more conciliatory mode.

When asked during a press conference on Saturday about his moderate leaning, Cupich told reporters, "Labels are hard for anyone to live up to. ...It's not my agenda, it's not what I feel. I'm going to try to be attentive to what the Lord wants."

Known to be considerably more rigid in his approach, George used strong rhetoric when opposing the passage of Illinois' law allowing gay and lesbian couples to marry. He called such unions 'unnatural.'

"This is first of all a rational issue before it's a faith issue," George told the Chicago Sun-Times in 2013. "That is, it's nature that tells us what marriage is, that in marriage, men and women aren't interchangeable."

Despite vehement opposition by George and the Catholic Church, Illinois' marriage equality law passed in November 2013.

George also made headlines in 2011 when he compared the LGBT community to the Ku Klux Klan.

"The rhetoric of the Ku Klux Klan, the rhetoric of some in the Gay Liberation. Who is the enemy? The Catholic Church," he told a Chicago television station.