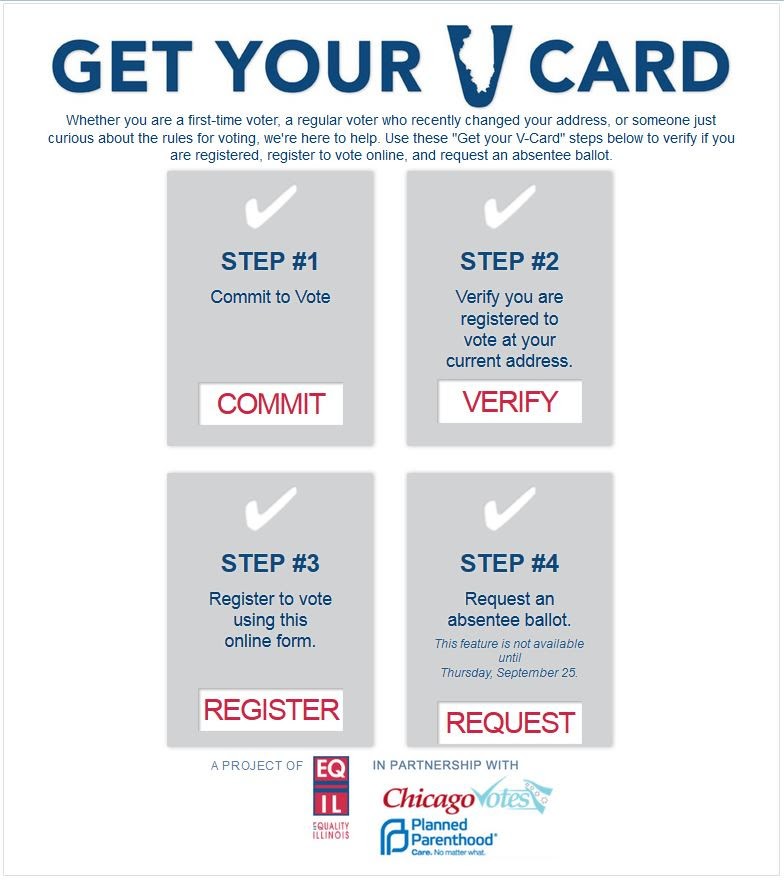 According to a news release from the LGBT rights advocacy group, The "Get Your V Card" campaign is geared at making the voting experience as easy as possible, including connecting Illinoisans to the new state service that enables them to register online.

"Voting is our most basic democratic right, and democracy works best when the greatest numbers of people vote. LGBT equality is supported by a clear, unequivocal majority of Illinoisans, and we have to make sure voters are registered and get to the polls to defend our societal progress from attack," said Bernard Cherkasov, CEO of Equality Illinois, the state's oldest and largest advocacy organization dedicated to lesbian, gay, bisexual and transgender Illinoisans.

The new campaign, in partnership with Chicago Votes and Planned Parenthood of Illinois, builds on the successful Equality Illinois "Vote Naked" campaign in 2010 that emphasized the ease of voting from home with an absentee ballot. An exciting addition for the "Get Your V Card" effort is the recent ability of Illinoisans, made possible by a new state law, to register to vote at home, at work, at school, at a public library, or anywhere they have access to a computer.

"We are committed to doing everything we can through the "Get Your V Card" campaign to maximize the turnout of voters who support these kinds of initiatives and to continue our progress to a more equal Illinois," Cherkasov added.

The campaign's website, GetYourVcard.org , is a one-stop location for voters who want to register to vote online, verify if their registration is up to date, and request an absentee ballot.

"Get Your V Card" launched an aggressive campaign on social media today starting with a video encouraging Illinoisans to register using the new online service provided by the Illinois State Board of Elections and accessible through GetYourVcard.org.


From a news release