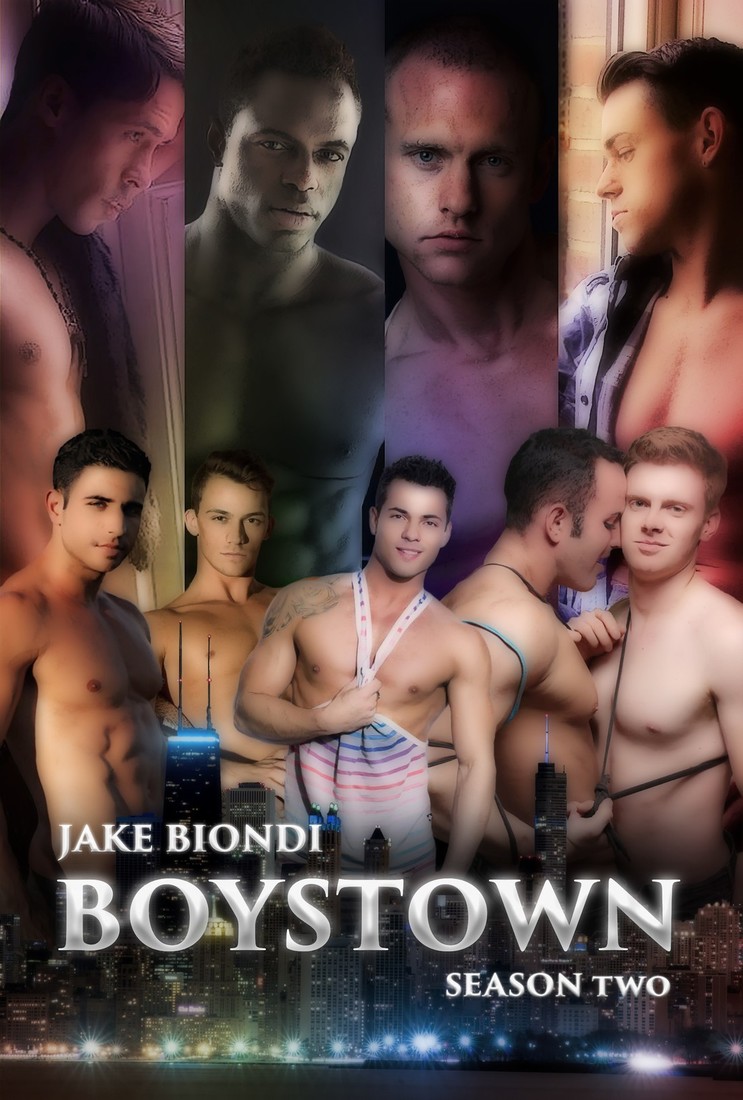 The second installment of local author Jake Biondi’s novel promises to be even hotter than the original.

Chicago, IL - Steamy. Sexy. Scandalous. Three words that can describe both a summer night out in Boystown and now any of the summer nights being spent in reading the highly anticipated second installment of local author Jake Biondi's serial-style novel named for Chicago's famed gayborhood. "Boystown: Season Two" was released on Monday, July 7, and fans across the nation can breathe a sigh of relief as they finally find out what was on the other side of Biondi's signature cliffhanger ending.

"The BOYSTOWN fanbase has really been growing like crazy; I am so grateful for the readers and fans," Biondi told ChicagoPride.com. "I am also proud to say that every single review of BOYSTOWN on Amazon is 5 stars. I think there are nearly 30 5-star reviews on Amazon so far -- reviews like that really help to attract new readers."

Biondi initially released "Boystown" as an internet serial (think Dickens meets Dynasty), allowing him to alter the story and characters based on reader feedback much in the way a soap opera will kill off an unpopular character or reunite a beloved couple. By the time he turned the first 10 chapters (or episodes, as he refers to them) into Season One in Thanksgiving, Biondi had a solid, loyal fanbase, some of whom have gone above and beyond to promote "Boystown."

Many fans who blog about books and writing featured the novel or invited Biondi to do a guest piece for them. Fans across the country have sponsored online book tours and group reads, encouraging their followers to share their experiences, with the most recent being on literarynook.com.

"Boystown" has garnered attention within Chicago as well as nationally. Local singer Amy Armstrong has given away copies of "Boystown" at many of her shows and the novel was also a sponsor for the About Face Theater's Wonka Ball 2014. In January, Biondi also appeared on the Soap Central Live radio show.

Distribution has expanded tremendously, with both a second edition of Season One and now Season Two available on iTunes, Kindle, Nook, Amazon, online at Barnes and Noble and on several other sites in addition to the Unabridged Books, 3251 N Broadway, here in Boystown and through the author's website www.jakebiondi.com.

But the main success of BOYSTOWN has been word of mouth," Biondi said. "I get emails and Facebook messages every day from people who picked up the book because a friend recommended it. I also reply to fans' emails and messages and love hearing their comments and responses to the books' characters and storylines."

ChicagoPride.com introduced readers to "Boystown" and the colorful characters Biondi has populated it with this spring. The storyline revolves around the lives and loves of the three Mancini brothers -- the youngest, Emmett, in a gay relationship, the middle, Derek, a married man whose affair with the character Cole has earned them the portmanteau "Dole," and Justin, the more mysterious brother who appeared at the end of Season One, but who Biondi says has caught the attention of fans, who curious about his sexuality, his past and his motives.

The connected web of their family, friends, lovers and even enemies populates the rest of the book, and span genders, races and ages. They include Derek's wife Joyelle, a tumultuous couple, recent college graduates who move to Chicago, one to follow a married man, a Latino Chicago cop and many more.

"Fans can expect even more twists and turns in Season Two," Biondi told ChicagoPride.com. "The book begins with the aftermath of the warehouse shootings. Three bullets were fired -- three people were hit -- and lives will never be the same."

Season Two also introduces several new characters -- including the highly anticipated Ciancio twins. According to Biondi, the book explores the family history between the Mancinis and the Ciancios -- and the Ciancio twins "arrive in Boystown with revenge on their minds."

"Season Two continues to follow the story lines and mysteries set up in Season One while introducing some new ones as well -- and the finale of the book puts the lives of most characters in peril," Biondi teased. "I can't say too much because I don't want to give anything away."

This February, Biondi held a contest seeking cover models to represent characters of his book covers. The contest put the local author in touch with an array of sexy men from across the country, many from right here in Chicago, whose sculpted bodies and dreamy smiles have seduced readers into the novel from both shelves and screens. A few of these models have also helped Biondi with another project -- bring "Boystown" to TV. The novel already reads like a TV script, with a focus on heavy dialogue and soap opera-esque cliffhangers, so converting it for the small screen seems like the natural progression.

"I recently 'converted' the first book into TV script format," Biondi said. "Over the next two weeks, I will do final revisions of the TV scripts and then begin to share them with interested parties in both Los Angeles and New York. So stay tuned -- bringing BOYSTOWN to TV is still a priority."

The release of Season Two also sees the release of a new ad campaign created by Michael Vargas, Biondi's new Director of Art, Design and Advertising. Vargas created the new look for the series, which better showcases Chicago city landmarks alongside the cover models that the audience loves, and featured the look on the book covers for the new edition of Season One and the recently released Season Two. Biondi has also brought on Patrick Murphy to promote the novel as the new Director of Social Media.

"I am so lucky to have such a great group of models on the BOYSTOWN team," Biondi said. "They are such kind, professional guys -- each with his own look, attitude, and personality that he brings to the team. I think Michael Vargas did a brilliant job of showcasing so many of them in such a great way on the new book cover."

As for what else comes next, Biondi says he's sitting down any day now to begin putting his ideas for Season Three down on paper, with a personal goal to be finished before 2015. He also hopes fans will continue to support "Boystown" by creating group reads and virtual book tours for "Season Two" and is considering holding another modeling contest for "Season Three," as he'll be searching for faces to represent the new characters.

Until then, Biondi is excited to see the reaction of his fan base to the latest installment in his series -- no doubt his inbox will soon be flooded with a combination of adoring praise and halfhearted threats from eager fans who read through the novel in a sitting and are left at his signature cliffhanger ending dying to know what happens next.

For more information, check of Biondi's website www.jakebiondi.com and pick up your copy of "Boystown: Season Two" today!