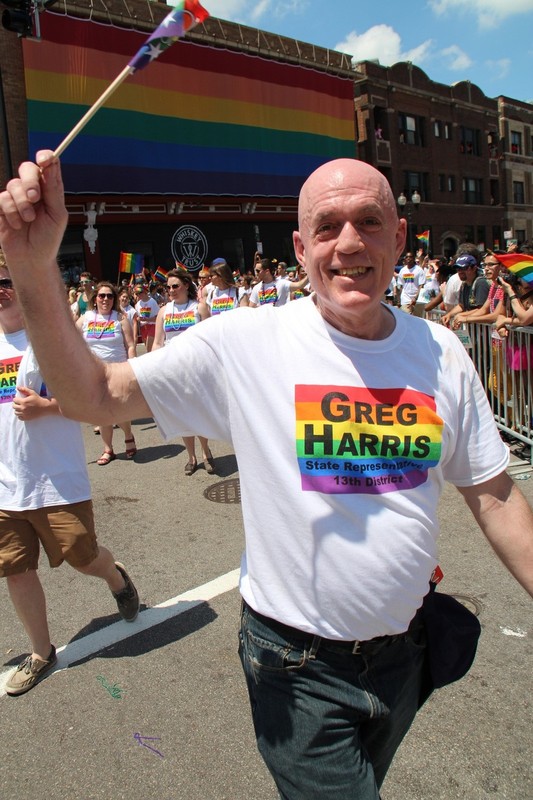 Chicago, IL - More than one million people turned out for the 45th annual Chicago Pride Parade as spectators crowded the streets from Uptown to Boystown to celebrate gay pride from the streets, rooftops and balconies on Sunday.

"Over 1 million people attended today's parade," Chicago Police said in a statement released to ChicagoPride.com. "Despite the large crowd, there were only a handful of issues including eight arrests, one of which was for criminal damage to a police vehicle."

Kristen Linscott posted several photos to Twitter and a video to Telly showing crowds sitting and standing on a squad car with a broken windshield. The video was recorded above Halsted and Aldine Ave in Boystown.

The festive four-mile parade, which lasted over three hours, stepped off at noon in Uptown and traveled through Lakeview, Boystown and Lincoln Park. Sunday was the first pride parade since Illinois marriage equality law was enacted statewide on June 1.

Marriage equality coupled with the beautiful weather brought out record crowds again this year. One million people attended in 2013.

"This is an important day in the history, not only in the state of Illinois, but the entire gay and lesbian movement," Chicago Mayor Rahm Emanuel told reporters before the parade. "That obviously we no longer as the state of Illinois have straight marriage and gay marriage, we have marriage."

Marriage was a big part of this year's parade with four couples tying the knot on a float sponsored by Sears.

Bruce Rauner, a gubernatorial challenger for Quinn, did not attend due to what a spokesman called a scheduling conflict.

"This parade we celebrate the diversity of our community and we also recognize the heroes and leaders who make our progress possible," Equality Illinois CEO Bernard Cherkasov told ChicagoPride.com before the parade. "It's important to know that our job is not yet done, and on Election Day we have to re-elect all those who made marriage equality possible."