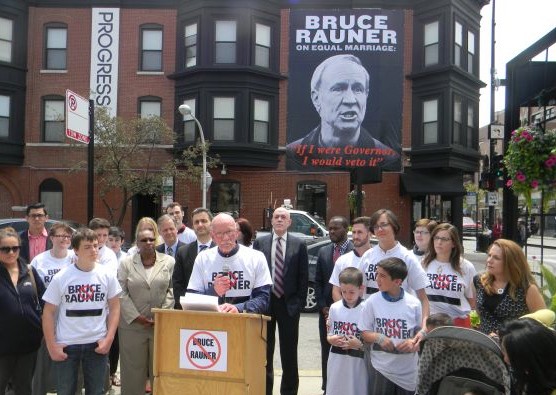 photo credit // matt simonette/windy city times
Chicago, IL - Politicians, activists and organization leaders were among those who gathered in Lakeview at the corner of Halsted and Roscoe Streets to warn of negative consequences for the LGBT community, and marriage equality, should Bruce Rauner be elected Governor of Illinois this November.

A large banner now at the corner shows a picture of Rauner and says, "Bruce Rauner on marriage equality: If I were governor, I would veto it." Many of the protestors wore t-shirts with Rauner's name and a red slash through it.

Art Johnston, co-founder of Equality Illinois, called Rauner, "an enemy of equality [who] is poised to become governor of our state." He added that activists would be using the upcoming Pride as an opportunity to "educate the public about the real Bruce Rauner."

Johnston said, "Most people know nothing about his social agenda. We want to make sure everyone knows where the real Bruce Rauner stands."