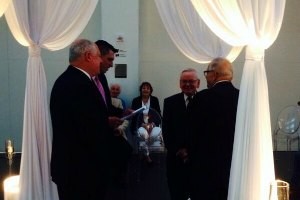 The men, together 51 years in July, were among the 15 couples who married at the Museum of Contemporary Art in downtown Chicago a day after a marriage law approved by lawmakers last year went into effect.

Darby, a veteran of the Korean War, and Bova are active in Chicago's gay community.

"I did not think this would ever come," Darby told The Huffington Post of his wedding day. "I was involved with the gay veterans for 20 years and it seemed like Don't Ask, Don't Tell would never come to an end. And when it did, it came so fast we were almost caught by surprise."

In 1995, the men held a commitment ceremony at the grave of Sgt. Leonard Matlovich, who in 1975 declared "I am a homosexual" on the cover of Time magazine, instantly making him a symbol of the military's outright ban against gay men and lesbians.