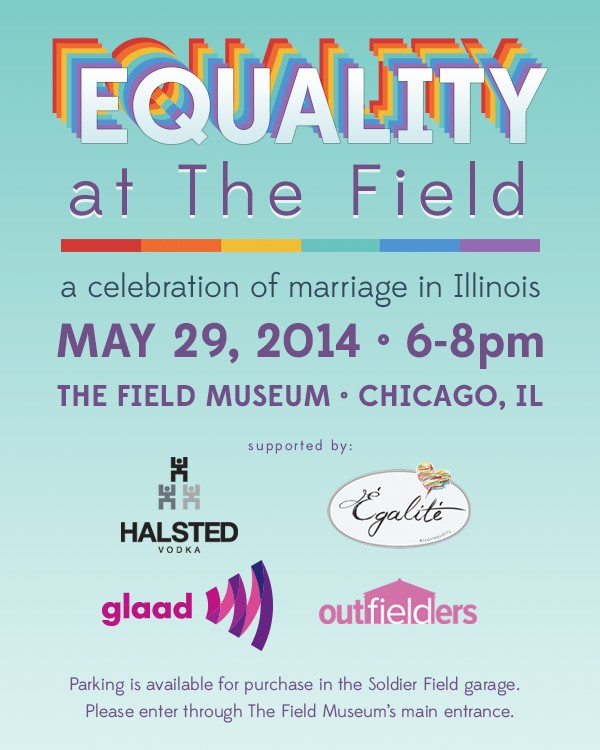 Chicago, IL - Chicago's LGBT- friendly Field Museum is hosting a celebration today in honor of Illinois' marriage equality legislation which will go into effect statewide on June 1. The event will mark the the start of a new partnership between Halsted Vodka and the museum.

The Field Museum, located on 1400 South Lake Shore Drive, is a globally important research museum and a great supporter of equality and human rights. Plus, the museum has a new in-house affinity group of LGBT staff and allies called OUTFielders.

"Halsted Vodka was created to champion equality," brand ambassador and mixologist Lee Keyes told ChicagoPride.com. "We are the only spirit that does that as part of its daily mission. Halsted Vodka gives 15 percent of our profits back to local LGBT groups to help them continue their community building and outreach efforts. To date, Halsted Vodka has donated to over 20 local LGBT groups."

About 200 people from Chicago's LGBT community and allies will enjoy a cocktail (or two) with Sue the T-Rex while showing their support for marriage equality. The event sold out within days of being announced.

"It's a great opportunity for supports of marriage equality to come together and celebrate our success in Illinois and to also continue to rally support for similar efforts around the country," added Keyes, "As a company that champions LGBT equality in everything we do, the Halsted team is especially thrilled to toast marriage equality in our home state.

In addition, this event will feature friends from Egalite (another brand that actively supports LGBT equality), GLAAD and members of its Chicago chapter and Tracy Baim, editor and publisher of Windy City Times. Baim was co-chair of the marriage equality effort, March on Springfield, and will be a keynote speaker today's celebration.

"I supported the passage of marriage equality because many in the LGBT community have been hurt personally and financially by not have access to the same rights and responsibilities of marriage" Baim explained. "I have covered way too many stories of hardship caused by that unequal access, whether that is access to healthcare, custody rights of children or dealing with the death of a partner."

Even though Illinois won the marriage equality battle, there are still numerous LGBT hurdles to overcome.

"We are very, very far from done," Baim continued. "In fact, the main reason I pushed so hard for marriage equality to be attained in 2013 was because it was sucking all the money and time away from other issues such as homeless LGBTQ youth, transgender equality, poverty issues, safety and education and much more."