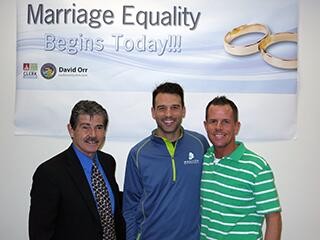 david orr with andrew and tom

Tom Crisham, 36, and Andrew Rodbro, 38, of Chicago's Albany Park neighborhood, were the happy recipients at the downtown office Friday afternoon.

"With each of these milestones, same-sex marriage becomes more an everyday fact of life," Orr said. "In less than two months the steady stream of gay and lesbian couples seeking marriage licenses shows the strength of the institution of marriage."

Orr, who has been a strong advocate for marriage equality, congratulated the couple personally as they applied for their marriage license.

Crisham, a banker, and Rodbro, a teacher, have been together for 15 years.

"These couples have come from every walk of life," Orr said. "City and suburban, urban and rural, doctors and dentists, attorneys and accountants, teachers, police officers, members of the military, students and retired folks. They've ranged in age from 18 to 87. We have seen same-sex couples from nearly half the states in the country come to Cook County to get married."

Of the 1,000 marriage licenses issued by Orr's office since Feb. 21, most (679) have gone to Cook County couples and nearly half – 491 have been issued to Chicago couples. The Chicago zip codes with the highest number of couples have come from: 60640 (63), which includes the Andersonville, Edgewater and Uptown neighborhoods; 60657 (44), which includes Boystown and Lakeview; 60626 (40) in Rogers Park.

A majority (630) of the 1,000 marriage licenses have been issued at the clerk's downtown offices. Clerk Orr's office reported same-sex couples from 24 states other than of Illinois and 15 counties outside of Cook have received marriage licenses in Cook County, which includes 48 couples from Indiana and 22 from Wisconsin.

On average, Clerk Orr's office issues about 5,300 marriage licenses to opposite-sex couples in a two-month period, or about 32,000 per year.