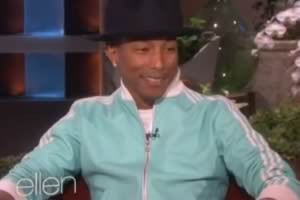 While discussing Happy, the lead single from his second studio album Girl, Williams deviated onto the subject of women's rights.

"We're a species that has a space station floating above the Earth for 20 years," Williams told DeGeneres. "We even have a rover on the surface of Mars. How can we be the same species that is telling people ... we have legislators and legislation in places, in certain places, that tells women what they can and cannot do with their bodies. How is that possible?"

"When I say equality," he continued, "I mean equality for everybody. Who are you telling who they can marry and who they can't? What is this? This is 2014."

"Yup, that right there," responded DeGeneres, who is openly gay and married.