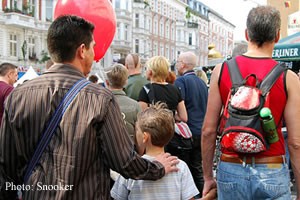 A greater percentage of people have a higher opinion of gay people than they do of Evangelical Christians, a new poll from the Human Rights Campaign (HRC) and Americans for Marriage Equality found.

Pollsters also found majority support (55%) for marriage equality, with 38 percent saying they were strongly in favor, while 40 percent remain opposed.

When asked to consider nationwide marriage equality, majorities said that its legalization would lead to less prejudice against gay people (78%), make it easier to grow upgay (76%), kids with gay parents having more legal and social protections (80%) and kids with gay parents less likely to be bullied (60%).