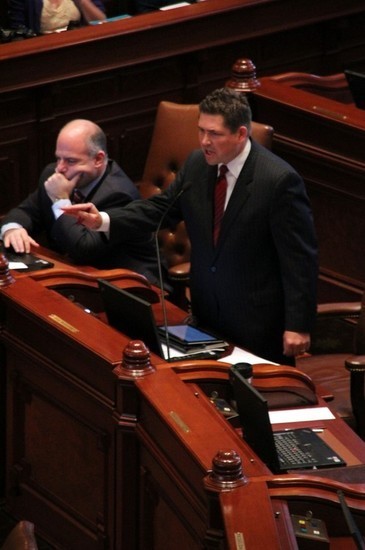 Following a federal judge's ruling handed down Friday that there is no need for gay couples to wait for the law to take effect in June, McCarter announced that he was withdrawing his bill (SB 2637), which was scheduled for debate in the Illinois Senate Executive Committee on Wednesday.

(Related: Plaintiffs in lawsuit among first gay couples to marry in Chicago.)

"It was my intention when I submitted Senate Bill 2637 this year to repeal the law which redefined legal marriage within Illinois law because the people of Illinois were not given a realistic chance to weigh in on an issue of immense and radical cultural change," McCarter said in a statement. "Given the level of influence and corruption we have witnessed by the well-connected and special interest groups in recent years, I am not convinced the will of the people was met by the original passage of Senate Bill 10 [the law legalizing marriage for gay couples]."

While the ruling is limited to Cook County – the state's largest county – supporters are calling on clerks in other counties to recognize the ruling and begin issuing marriage licenses to gay couples before the law's June 1 start.

"The federal court's ruling responded to a lawsuit filed in Cook County and applies initially only to the Cook County Clerk's office, but clerks in the other 101 counties can take official notice of the decision and its reasoning," Bernard Cherkasov, CEO of Equality Illinois, said in an emailed statement."We will be reaching out to county clerks all around the state hoping that they will also be persuaded by the judge's rationale.After all, the federal court said that it is unconstitutional to deny same-sex couples marriage licenses."